WAX Blockchain is Building a Better Planet, One vIRL® NFT at a Time 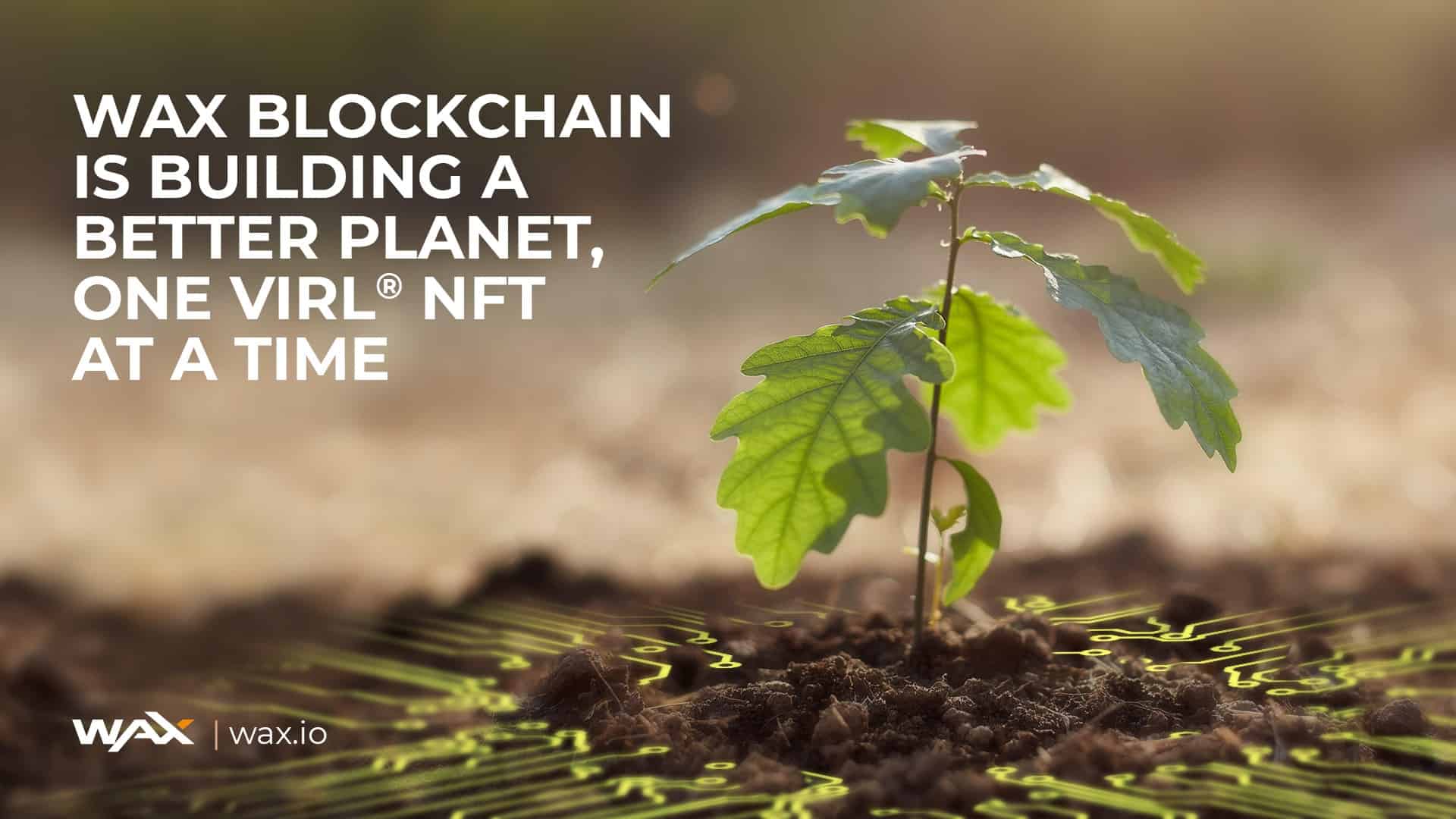 Blockchains have quickly become public enemy number one for their impact on the environment. While there are definite reasons to worry, it’s important to know that not all blockchains are created equally where energy usage and CO2 emissions are concerned.

The WAX blockchain was innovated with the environment at top of mind. In fact, WAX vIRL® NFTs can actually improve the health of the planet.

WAX is a certified carbon neutral blockchain that has solved the environmental issues presented by other blockchains. Not only is it more energy-efficient than its competitors, but it has gone a step further by actually reducing carbon emissions and offsetting more than 211 tonnes of carbon dioxide as of May 21, 2021.

If you’re an NFT enthusiast or are contemplating getting involved in buying, selling, and trading (or even becoming a creator), it’s vital that you understand that it’s not NFTs that wreak havoc on the environment. It’s 100 percent about the blockchain they are minted on.

WAX uses 125,000 times less energy per transaction than its nearest competitor. This figure is exciting, but things get real when illustrated as follows:

Parcel Pollution and Why It Matters in the NFT Universe

Roughly 30–40% of all online purchases wind up being returned, and a hefty portion of those returns wind up in landfills.

The reason? It’s usually easier and less expensive for corporate giants, such as Amazon, to throw items away rather than re-package, re-shelve, and re-sell.

If the planet is to curb these staggering figures, we have to get creative as to how we manage e-commerce and do everything we can to minimize how many times products are shipped from place to place.

WAX vIRL® NFTs give consumers the power to make a conscious decision whether to trigger the chain of events that see an item packed, shipped, and delivered to their door — thus, avoiding the outrageous amounts of CO2 being pumped into the atmosphere.

WAX provides an easy-to-use platform for artists to onboard and sell their work, while remaining carbon neutral. Environmentally conscious artists can be proud that they’re making every effort to protect the earth as they share their passion with fans.

Plus, NFTs come to the rescue for artists and musicians struggling to survive in the digital age. They create artificial scarcity so that artists can fully reap the benefit of their hard work.

For example, one of your favorite musicians is probably scraping by on a fraction of a penny every time someone streams one of his or her songs. BUT, with WAX vIRL® NFTs, they instantly gain the power to sell a one-of-kind song or album to the highest bidder. This can mean hundreds, thousands, and even millions of dollars in a matter of days… and even hours.

While this is a game changer, the sad truth is that several awesome NFT projects on WAX have been halted because fans of artists/brands aren’t aware of the energy efficient nature of the WAX blockchain.

It’s vital for both artists/brands and their fans to know that if all the vIRL® NFTs minted and traded to date on WAX had been created on competing chains, an additional 4 million tonnes of carbon dioxide would have been released into Earth’s atmosphere.

NFTs are not to blame for staining the environment, it’s all about the blockchain they’re minted on.

Why NFTs and Not Traditional E-Commerce for Collectibles?

For many, the idea of NFTs and their power is a bit vague. So, let’s take a quick moment to make sense of them.

Trevor Noah of the Daily Show recently spoke to their relevance: “The truth is… the idea of spending money on digital collectibles isn’t that much different than spending money on anything else… people collect baseball cards, beanie babies. NFTs are really just a twist on that!”

What he says is accurate, but there’s more.

Yes, there are digital only collectibles and then there are WAX vIRL® NFTs that pair a digital art piece, game, collectible, record, etc. with a real item that’s shipped directly to your door.

Traditional e-commerce usually sees a collectible sold for a set amount or auctioned and then sent directly to the collector. That collector may then decide to resell it — this process can happen over and over again in a relatively short time period, equating to lots and lots of time spent listing the item, interaction with buyers, hoping the funding is legit, and shipping. So, we’re talking CO2 emissions for the technologies being used to list/sell items and ship them around the world.

As mentioned above, Amazon’s 51.17 million metric tons of carbon dioxide emission is really something to talk about — especially when that is the equivalent of 13 coal burning power plants running for an entire year. Collectibles are a sizable category on Amazon and the world should know there’s an alternative.

WAX vIRL® NFTs keep a collectible safe in one spot as the collectible changes hands over time. It isn’t until a collector decides to have his or her token burned that the deshelving, packing, and shipping process is triggered.

All the while, a collectible’s worth has the power to exponentially sky rocket. Not only is it great for the environment, it makes collecting rare objects more thrilling than any time in history.

For the world of blockchain and NFTs to succeed and rise to its potential, we must educate each other and find solutions that make the best sense for the planet.

At WAX, we are doubling down on this effort and are working around the clock to make our blockchain more efficient. This is something we can all be proud of.

We also ask you to share this information — pass it to friends, colleagues, and on your social feeds. The more the news gets out there, the more opportunities there will be for artists, fans, collectors, and crypto enthusiasts alike.