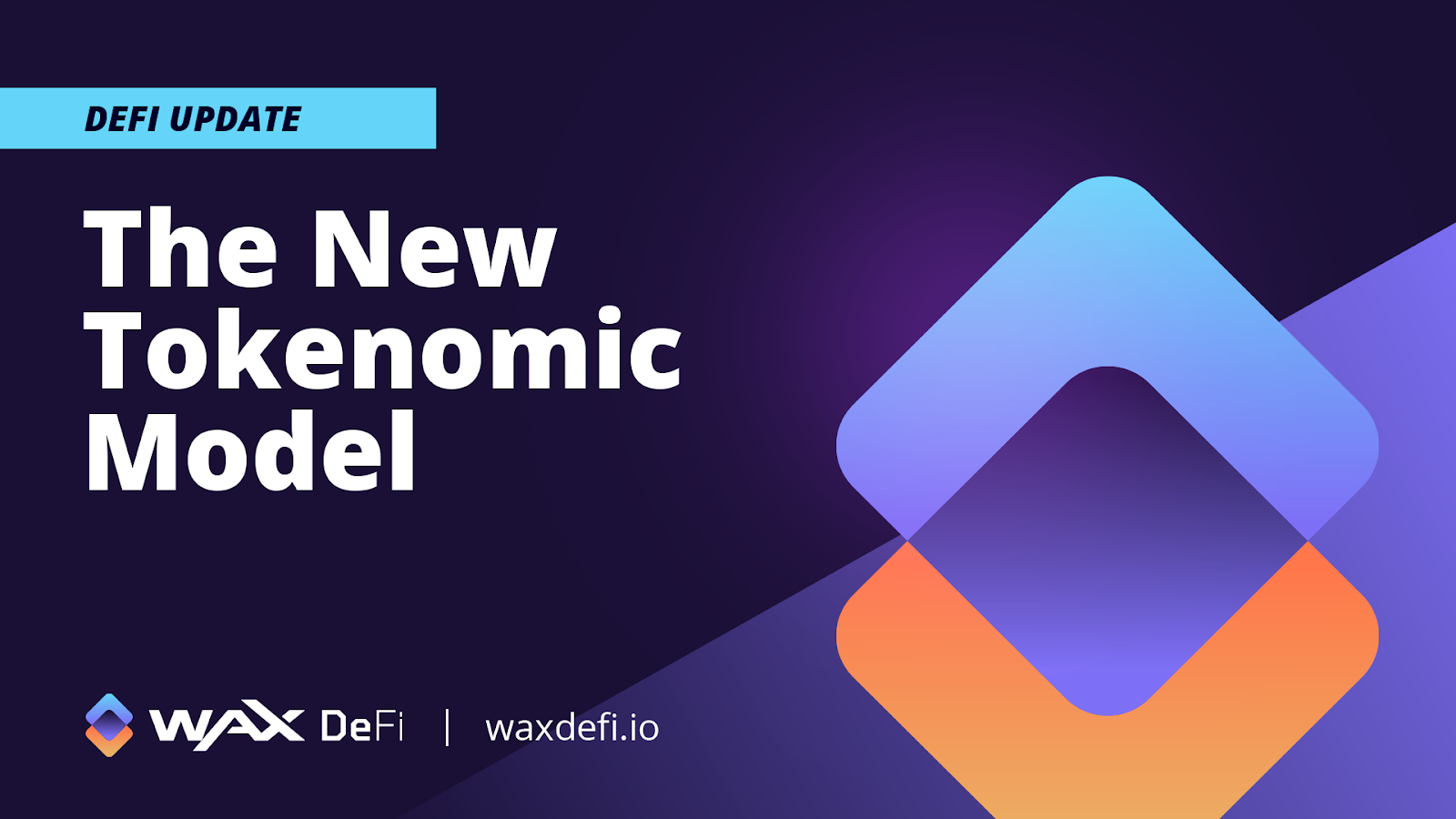 WAXP is now accessible to everyone via WAXP x ETH Bridge.

In order to take advantage of the new ERC20 WAXP, WAX Blockchain generated fees will no longer be converted to ETH for distribution.

Both Distribution Pool and PiggyBank Pool rewards will be allocated via ERC20 WAXP tokens, starting with the epoch on August 31, 2022. Rewards will be available to be claimed by WAX DeFi participants here.

With the advent of the bi-directional bridge, there will be some changes to the tokenomics on the DeFi. WAXP will no longer be burned when converting 1000 WAXP into 1 WAXE. Instead, when someone trades 1000 WAXP for WAXE, the WAXP will instead be held in an escrow account. This means that the deflationary tokenomic mechanic of burning WAXP into WAXE is ending.

The main deflationary tokenomic mechanic for WAXP will now be the 20% burn of accrued economic activity fees that occur on the WAX blockchain. This burn occurs at the end of each epoch (now every 4 weeks).

***Update 11/5/2020: We’ve made some updates to the WAX Tokenomics model that improves its value to the WAX Community:***

Today I would like to share some exciting news regarding WAX. WAX has created a new tokenomic model that combines the rapid growth of NFTs with the superior monetization capabilities of DeFi.

The core element of the new WAX tokenomics system is its inter-blockchain design.

Simply put, we are injecting the economic value created on WAX into the Ethereum DeFi ecosystem. More precisely, we are taking what WAX does best — creating, selling and trading NFTs — and linking the value generated from that activity to Ethereum, the blockchain world’s monetary system. This approach combines two blockchains — each the best at what it does — to create the foremost NFT collectible market experience.

Unlike the majority of current DeFi platforms, WAX provides a sustainable source of value to stakers. This is because WAX DeFi is fueled by NFT transactions — a market with attractive long term prospects and where WAX is strongly positioned.

Whenever a new technology emerges, it is generally first applied to an existing market. Paving over the cow paths left by the prior technology, so to speak. New technology, same use case. A better, faster, cheaper experience. Perhaps. But not a novel one. Real excitement happens only when the new technology is applied in a novel way that allows people to do something desirable and unexpected that they could not do before. That is the aperture moment. The moment of enormous value creation.

The NFT market is at that threshold today.

NFTs emerged as consumer items less than three years ago. Yet based on rising consumer demand for new NFT content and strong interest from forward-thinking brands across a diverse set of industries, I believe NFTs will soon emerge as a stand-alone entertainment medium with global mass market appeal. By way of comparison, the global video game industry generates more than $100 billion in virtual item sales annually. I believe NFTs will ultimately surpass this level.

NFTs will stand side by side with movies, music, and video games as a distinct entertainment format. Every consumer product that can not be eaten will become an NFT.

This clearly bodes well for WAX, as we’ve been dubbed ‘The King of NFTs.’ WAX has not only surpassed Ethereum in terms of NFT trading activity — it is becoming the NFT platform of choice among many top global consumer brands. This is not an accident. WAX’s rising stature in the NFT world is a result of our well-informed design decisions and our careful attention to the needs of virtual item traders.

This is why we built WAX, the #1 NFT platform — to allow brands and consumers to participate in this potential $100 billion market.

Separating Consumer Activity from the DeFi Functions — The Benefits of an Inter-Blockchain Solution:

In thinking about the proper role WAX should play in the future of NFTs, it became evident to us that while WAX is a superior platform for making and trading NFTs (i.e. consumer activity), it is not the best place to custody and maximize the transaction value generated from that activity (i.e. DeFi functions).

WAX economic value (i.e. author commissions, other network fees) is isolated today in the relatively small EOSIO ecosystem. A better solution would be to separate the NFT consumer activity from the financial rewards generated from that activity — using the blockchain that’s optimal for that purpose.

This realization is what drove us towards the new WAX tokenomic model we are announcing today. The WAX Blockchain will continue to perform the core NFT operational functions (i.e. item creating and trading), since it was designed specifically for that purpose and outshines every other blockchain in this area. While the capital generated from WAX NFT commercial activities will be transferred into the vast and growing network of financial services available on Ethereum.

Ethereum — The Monetary Hub for the WAX NFT Trading Empire:

Regarding our selection of Ethereum, that decision was simple.

Ethereum is best positioned to become the monetary system for all blockchains.

As far as alternatives go today, Ethereum has no equal or even a close second. Every other chain today is largely irrelevant in this regard. Of course, nothing is static in the blockchain world. Another blockchain, including WAX, could serve the same functions in the future. But for now, Ethereum it is.

I would liken Ethereum’s DeFi position to the way London emerged at the dawn of the industrial revolution to become the global center of credit and banking. As London built upon its position as the trusted custodian of trade capital and foreign exchange, other territories were able to sharpen their focus on the things they could do best — leading to a rapid rise in world trade. I believe Ethereum and other blockchains will evolve in a similar fashion because we continually see the move towards specialization as complex markets expand. As markets grow, specialists proliferate. And with specialization comes its twin, comparative advantage.

David Ricardo’s subtle but brilliant insight is that we are all better off focusing on the things that generate us the highest returns, even if we possess an absolute performance advantage in other commercial areas. As long as your efforts are more richly rewarded focusing on one thing, you shouldn’t allocate any effort to doing different lower-returning activities. In other words, every participant in a complex market should direct its most coveted resources towards their best and highest use. Whether those resources be a scarce pool of talented developers, the mindshare of the most insightful entrepreneurs, or the attention of surplus capital holders. Comparative advantage is a pillar of free market capitalism. And I believe it will become a pillar of the global blockchain industry as well.

Blockchain maximalists of course will tend to disagree with this prediction. They see a future where one blockchain rules them all. But the historical record in matters of world trade and technology innovation — where comparative advantage reigns as a dominant force — makes it evident to me that blockchain maximalists have it wrong. There will not be one chain to rule them all. The world is too complicated and the demand for tailored and optimized products and services is growing too fast for that to happen.

Ethereum does some things very well, but not everything, as the tweet below illustrates:

WAX also does one thing really well (i.e. serving consumers and brands interested in NFT collecting and trading) and that is where it should focus.

Under the new WAX inter-blockchain tokenomic model, the operational functions of NFTs will be conducted on the WAX Blockchain, a chain optimized for that activity, while Ethereum will become the capital vault of the WAX NFT empire.

In highlighting Ethereum’s strength in DeFi I want to emphasize that I am not declaring Ethereum is somehow technically limited to that activity or otherwise unsuited for other commercial purposes. My point is that in a free market, your community ultimately dictates where you go. And right now, the Ethereum community is marching to the drumbeat of DeFi, not NFTs. So if you believe we are in the early days of the blockchain industry, and that this industry will continue to grow from here, then you should assume the powerful principle of comparative advantage will take hold and strongly influence future blockchain development. WAX is taking the first step in that direction.

What Specifically is the New WAX Tokenomics? A Short Explanation:

Let’s start with the basic building blocks. There are six Ethereum-based components to the new WAX Tokenomic model. These include:

5. WAXG — a new Ethereum ERC20 Governance Token. WAXG will be given to those who stake their WAXE-ETH in the WAX Economic Activity Pool. You can then do one of two things with your WAXG: burn WAXG and receive ETH from the PiggyBank pool in exchange, or vote with them to adjust Governance parameters.

a. Distribution Pool — designed to accumulate a percentage of WAX Blockchain-derived value. WAX fees generated on the WAX Blockchain will be converted to ETH for distribution to WAXE-ETH token holders who stake their tokens in the WAX Economic Activity Pool.

So how will it work? The eight steps illustrated in the diagram below provide a basic overview of the WAX tokenomic process flow:

We will publish a more detailed schematic of the WAX tokenomic system soon. This overview is meant to give our community a solid understanding of the overall concept before diving into the details.

Summary of actions that WAX Token holders will take in order to benefit from the WAX Tokenomics model:

WAX — The Dawn of a Fourth Generation Utility Token:

With the launch of the new WAX inter-blockchain tokenomic model, WAX will leap from a first to a fourth generation utility token. The chart below highlights the main features of each utility token generation.

The principal evolutionary change between third and fourth generation utility tokens is the inter-blockchain component.

I think this is a major improvement in current utility token design. Fourth generation tokens targeting fast growing global markets is where you want to be. And that’s where WAX is going.