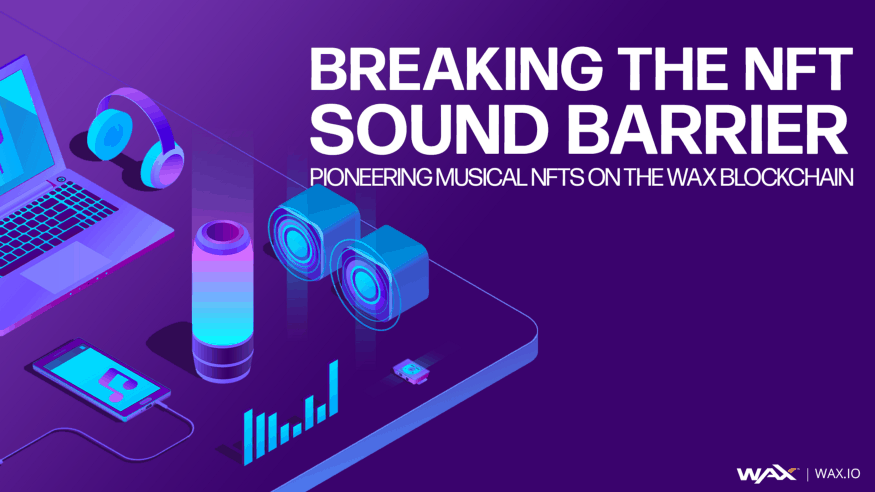 Imagine listening to your favorite song. What genre is it, how does it make you feel and does it bring back any memories? Music has a knack for touching our souls in all kinds of ways. It helps us through grief and hardships while celebrating our achievements and joys. Now the Blockchain is expanding its horizons and is bringing tokenized music in the form of NFTs to the industry; a new way to view, enjoy and share your favorite tunes. WAX has brought big IP to NFTs such as Capcom and Topps. In December of 2020, Deadmau5 launched his first NFTs on the platform. With every big release, WAX offers new and innovative projects; bringing music to this space is no exception.

Digitized music can appear in many different ways as an NFT. The soundtrack may be accompanied by a striking visual, animation or even a music video. There are no rules and we are just at the cusp of discovering many more varieties of these collectibles as more musicians get on board.

Just recently, one of the world’s first NFT music albums was released by musician 3LAU on the Blockchain; Ethereum, to be specific. In a flash 48 hour sale, the musician brought in over $11.6 million — this all from 33 auctioned-off, redeemable and unique NFTs that ranged from unreleased tracks to special editions and more.

Although 3LAU was impressively successful, the general public did not even have an opportunity to get in on the fun due to the devastatingly steep prices and fierce competition. WAX believes there is another way; a way for everyone to indulge, interact with and enjoy all different forms of NFTs, including those containing music. Instead of charging astronomically high prices that most people can only dream of affording, WAX leans more towards higher volume at lower costs. William Quigley says:

It is far more impressive to sell 1 million copies of an NFT for $1 each than it is to make a fortune on a handful of sales; and it can be done without outrageous gas fees, unlike on Ethereum. Ethereum cannot process a high volume of sales due to the gas fees.

The system would be bogged down by the transactional traffic and it just wouldn’t work.

Former Tour Director Doug Wilson has been in the music industry for over 15 years, he says, “From the artist’s perspective, many, including the Musicians Union UK and Ivors Academy, have described the current online streaming revenue model for artists as ‘broken’.” Doug also points out, “Digital service providers (DSPs) such as Spotify and Apple Music are reported to pay out an average of just $0.0032–0.0056 per stream to an artist or songwriter. So for 10,000 streams on a given track, an artist would receive a maximum of $56, often split amongst several members of a group of songwriters. The lion’s share of streaming payout goes to major records labels and the top 1% of extremely successful artists on their rosters. Conversely, the vast majority of artists are forced to rely on touring revenue to support their careers; something that has been severely impacted by the effects of the COVID-19 pandemic.”

Just like with digital creators, NFTs offer musicians and songwriters a new opportunity for their work to be valued and be remunerated fairly. They also offer fans a unique and fun way to support their favorite artists.

The Ethereum network is so congested that even making a transaction on a lower-value item can cost unrealistic amounts of money. The gas fees often prohibit the general public from interacting with the market and auctions. On the flip side, WAX is as free as a bird. Not only is it the easiest wallet to explore and interact with, but it is essentially free to use. There are no decimating gas fees, and the selection of affordable NFTs is outstanding through various releases and secondary markets. The WAX platform is primed for mass adoption; consumers do not need to learn how to get a wallet, how to obtain crypto nor do they need to know what blockchain is. Users can start collecting NFTs with three clicks of a button when they create their WAX Cloud Wallet. With this being said, WAX firmly believes that everyone should have a fair shot at collecting their favorite NFTs, not just the privileged few.

Investor and co-founder of Magnetic, Megan Kaspar, is constantly on the lookout for pathways where crypto technology will be adopted by the next billion people. She says that, “the music and talent industry’s utilization of NTFs affords a natural improvement with concrete benefits in the share and exchange ecosystem between creators and fans — by helping them easily achieve what they already want to do: spend, save, and make money.”

She further clarifies that, “through the use of NFTs, every music artist can essentially be their own distribution channel for their creative work. Tying an artist’s IP to NFTs offers multiple tangible benefits not available to creators prior to blockchain technology — such as the convenience of immediate payment, eliminating opaque accounting and lengthy settlement processes from third-party platforms along with expanded reach and direct access to a global network of fans. For example, with NTF technology, once a fan makes a purchase, the artist has an established connection to their fans, allowing them better understand each individual fan and to foster a continued relationship direct to fans through announcements, information and promotions delivered to the fans wallet in the future.”

As innovation continues on the WAX platform, NFT collectors can expect the continued onboarding of mainstream partnerships with a diverse catalog of musicians and actors who are connecting with their fans on a whole new level! We are excited! Are you?