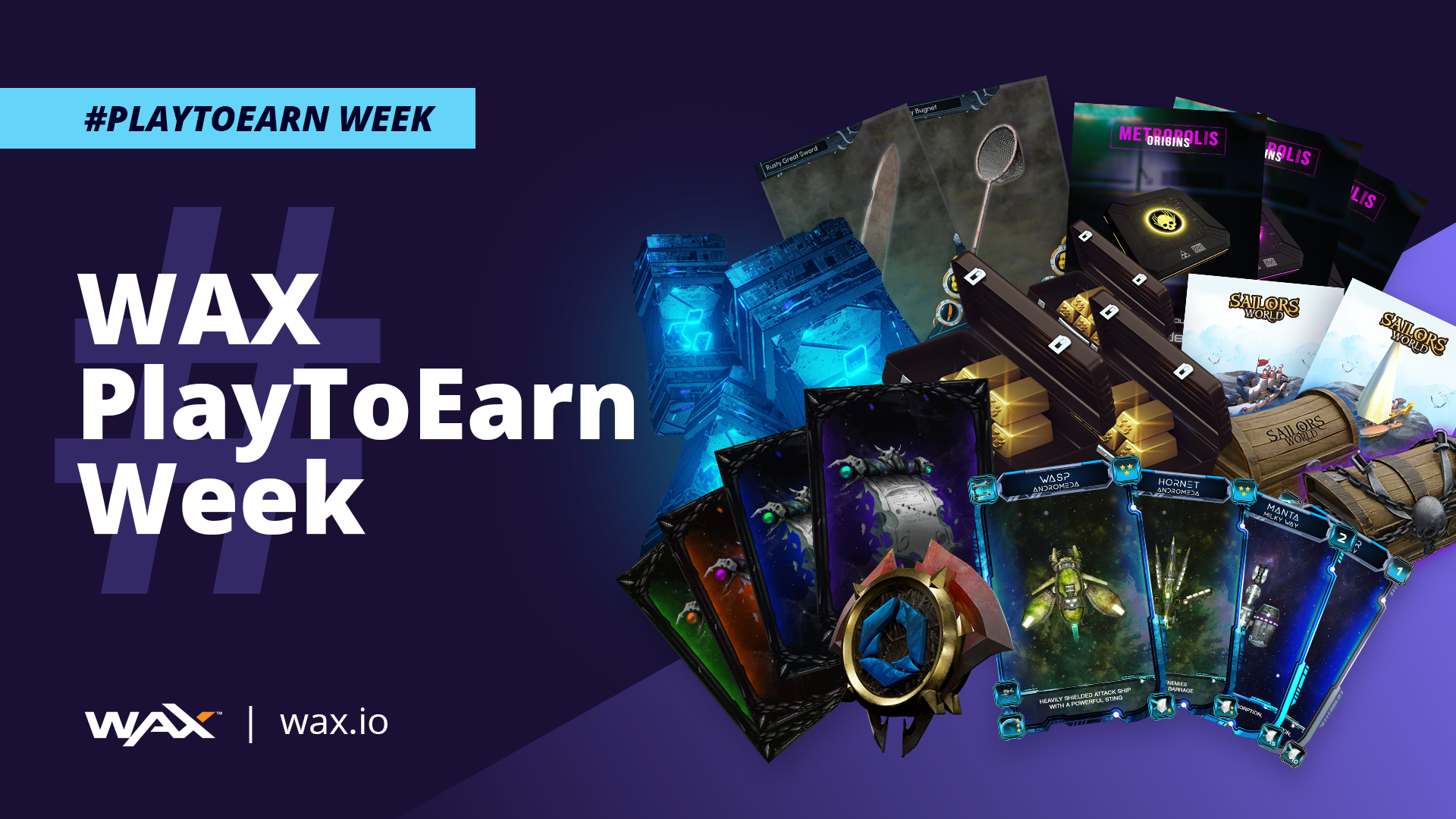 If you’ve been around the block on WAX, it’s easy to see why play-to-earn gaming is on the rise. Whether you enjoy action games, shooters, battle royale or even card games, we’ve got you covered — and our catalog is growing all the time!

In order to celebrate our incredible community and game devs, WAX is hosting a P2E gaming week, where we’ll be highlighting some of the top-performing games on our blockchain, as well as hosting a killer giveaway of NFTs from featured collections.

🎉 Get In on the P2E Week Giveaway

If you want to be a part of the raffle for some awesome NFTs, you’ll want to follow our socials and enter here. 🎉

Keep your clicking finger ready to go, you won’t want to miss out!

No matter if you’re a WAX veteran or new to the platform, the following games are sure to please:

Welcome to the rowdiest play-to-earn experience on WAX, where you can manage a stable of Brawlers, equip them with Gear (like Trash Cans and Brass Knuckles), send them to the Ring and have them duke it out to bring in the big bucks.

The game’s collection offers some of the craziest characters in all the Brawlerverse, including the “Founder’s Edition” Legendary 1-of-1s currently on auction here. There’s never a dull moment, so buckle in for a wild ride.

When you get into the action you’ll quickly become familiar with the battle cry: Brawl, Craft, Earn, Repeat!”

Get in on the action and start earning now!

Suit up and start honing your skills — The Forge Arena is a highly competitive 5v5 first-person shooter, where you take up arms and fight to the death.

Not only does this game offer exciting adventures with a high skill cap, it is also gearing up for P2E rewards through WAX this summer. This will be a robust, player-driven economy that puts the power in the community’s hands.

We can’t wait to see where The Forge Arena goes from here!

Jump into the fray in HodlGod, an intense third-person multiplayer game on WAX.

This adrenaline-pumping experience pits you against other players in an arena, all with the same goal — to be the last one standing.

If your skill is up to snuff, you may just come out richer than when you entered. Collect skins, equip gear and start earning VOID. Plus, more game modes are sure to be on their way, including an intense 2v2 throwdown and tournaments.

Will you be the next HodlGod?

Life on Mars isn’t what you’d expect. In fact, the land is full of riches and thriving settlements, granting you bountiful opportunities to flourish.

Join the fight in Million on Mars: Land Rush in a real-time strategy game to claim land, build your settlement, farm, earn Dusk token rewards and more. This P2E game is chock-full of unique NFTs to help you on your way, and the player-driven economy is the cherry on top.

Be the Martian entrepreneur of your dreams and start today!

“Seek your fortune” in Alien Worlds, where you can discover NFTs you can use to connect and play with others.

You can also earn and stake Trilium that will give you power in the Planet Decentralized Autonomous Organizations (Planet DAOs) — where much of the action happens.

Another option is trading game cards with other players, all to bolster your strategy on Binance Smart Chain, to be used for mining, fighting and missions.

In a far-off galaxy resting among the stars sits R-Planet, a land full of priceless resources, scientific anomalies and unrest between factions.

This P2E game lets you become an Inventor, where you can enter the Alchemy Laboratory to mix elements in the hopes of creating new materials. If you’re lucky and discover a new recipe, you will be showered with rewards from the Investor Prize fund, plus some WAXP.

R-Planet also is getting ready to up the ante with a real-time strategy Conquest mode, which will be playable on both PC and mobile devices. Join a faction, build a base and charge into battle to claim the win.

It’s time to find your sea legs in Sailors World, a P2E game where you collect and craft Ships, send them on treasure hunts in Expeditions, go Trawling for DUB and WRECK and find epic loot.

In fact, you can even own a piece of the watery depths by being a landowner, where you can earn a commission on everything that is mined by other players within your realm.

If you’re feeling particularly feisty, you can send your ships off to Battle in both PvE and PvP environments. There are killer rewards if you come out on top, so don’t hold back!

Step into a new kind of play-to-earn game in the 3D expansive virtual world of Immersys, an MMO destined to shake up the blockchain.

Players in this unique world are able to engage in all kinds of MMO-type activities, such as battling (both PvE and PvP), gathering and crafting of NFTs, hanging out with friends and so much more.

This truly begins to bridge the gap between blockchain and traditional gaming, where you’ll experience uninterrupted gameplay, while also incorporating the NFT factor. Creators can even import their assets into the game for players to spawn, showcase or wear.

But that’s not all. Visit the social hub of Aurora City, where you can browse player-owned shops and purchase other NFTs from the market in real-time.

Mecha World revolves around the building and customization of robotic animals known as Mechas. Here, you can send them on missions, level them up and craft for some pretty serious upgrades. Plus, you can own land and generate passive income from other users who stop by.

Meanwhile, Cosmic Clash dives deep into battle gameplay, where strategy and logic reign supreme. Line up your ships and go head-to-head with other players to climb the leaderboards and earn exciting prizes.

Because both of these games are developed by FGL, the tokens are essentially interchangeable between the two games, increasing token flexibility and freedom.

In a futuristic cyberpunk era, Metropolis Origins turns TCG gaming on its head. This is a fast-paced, story-rich game where humans and A.I. coexist — although, there is unrest between the three factions.

Unlike other card games, this one has made sure to provide you with a sense of physicality. Every move you make could have a significant impact later in the game, even if it seems trivial in the beginning. Through this type of gameplay, players can really sink into the fantasy of Metropolis as events unfold through Faction Wars.

The devs also see the community as an essential part in creating, maintaining and progressing the story and gameplay. Everything that happens, every story decision and every gameplay direction is impacted by you, the player.

What Will the Future Bring?

The upcoming years are sure to be a delight as we see a more robust catalog of games added to the blockchain.

What you see now is only the tip of the iceberg, and many of these projects are pioneering the way for innovation and integration.

Not only will we continue to see the token farming games that we’ve come to know and love, but also video games with a more traditional and interactive feel, such as The Forge Arena and Immersys, while still enjoying the NFT side of things and benefiting from P2E capabilities. There is a future where web3 starts to move from 2D and more into 3D as technology improves.

Ultimately, we’re looking at mass adoption worldwide, where non-blockchain users can onboard easily and start to sense the value in the P2E experience, all while having a blast. Together, we can bridge the gap between crypto-enthusiasts and gamers and bring it all together in beautiful and beneficial ways.

Times are changing and WAX is taking the lead, thanks to all of the amazing devs and community members that have joined us on this journey.

Why Do Game Devs And Creators Build on WAX?

We asked each of these projects why they believed WAX was the blockchain to beat, and the answer was consistent across the board: carbon neutrality, buttery-smooth transactions, easy onboarding/wallet creation, lack of gas fees and the killer community (that’s you)!

Join a thriving community of NFT and gaming enthusiasts and become part of the WAX Community on Discord. Join here: go.wax.io/Discord.