The State of the Union: Blockchain Brawlers 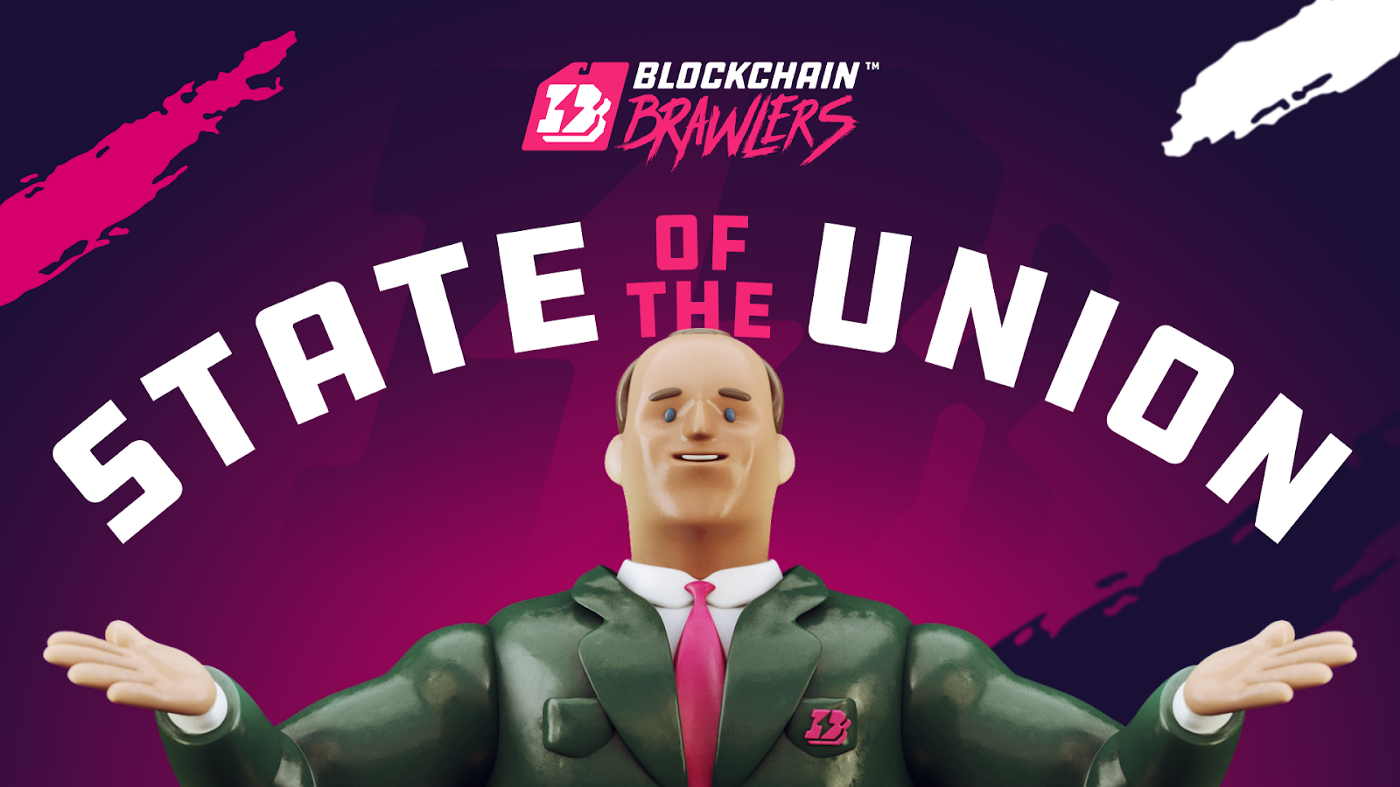 With all of the amazing things going on, we wanted to really take a deep dive into the development comings and goings of Blockchain Brawlers. The monthly calendar that we put out is an excellent place to start — but there’s so much more to look at, and we want to share that all with you.

We hope our transparency and candor give you a new perspective that you’ll find enlightening and beneficial to your journey here with us.

A Quick Look Back

In early August, we completed our token distribution feature called “The Mining Phase”. Players currently hold a vast majority of the 1 billion tokens, while the team holds the rest.

As previously reported, we will use our tokens for player acquisition and promotional activities, which are further detailed below. Don’t worry, our intent and utilization plans for the token have not changed.

Earlier this August, the Summer BLOCK Party launched as a special thank you to our existing players. And, over a few short weeks, we gave away over $30k in prizes recognizing everyone who supported our game. These prizes included some Legendary Brawlers that we had purchased from existing players via the secondary market, rather than just minting more Rusty Klutz’.

We also just completed our first closed beta test of the Richard Garfield designed card game, which will be the fulcrum of our initial PvP esports experience.

It goes without saying that the overwhelming response, interest and engagement displayed by our limited testing group (about 150 players in total) reinforced what we believe. We are on the path to building the best game in the Web3 gaming sector.

It’s much easier to be aggressive with player acquisition and promotional plans when you have a great game on your hands. We know everyone wants to play the best games while truly owning and controlling content they bought, crafted or traded for, and we are on course to deliver this day 0 promise to you.

This week, we were supposed to be launching the PvP asset crafting feature driven by the BRAWL-O-SEUM.

This is our most ambitious and deepest feature built to date. It contains (quite literally) a lot of moving pieces. From the 1,000 levels designed by hand, to the ability to single click bulk pack craft/pack open to the new upgrading game, there is a lot to design, build, integrate, test, tune and deploy.

These packs crafted with a “BoS” will be able to be sold directly to other players natively from within the game for BRWL and (eventually) Gold. This makes it a bit harder to hit an aggressive launch date, which was originally targeted for August 31.

We strive to stay true to our word, but we also make it a priority to inform you when things get delayed.

After considerable efforts to try and maintain our original date, we realized it was not possible to beat the timer without sacrificing quality. To avoid a half-baked product just to make a deadline, we’ve come to the conclusion that some additional time is required to ensure everything meets our highest quality standard. It is with all of this in mind that we are pushing the date of the BRAWL-O-SEUM to September 15. The new twist on upgrading cards that will be generated by this crafting functionality will be out the following week on September 22.

This does not mean that there will be nothing to see or do until then. When we publish the September content calendar later this week, you will see an article on the BoS look and feel.

You will also see us commit to an “Open Beta” testing phase where Brawlers will be throwing down in the Ring with all the latest balance changes implemented surrounding the scoring rules — the moves and cards will be limited to Uncommon assets and below.

There’s so much more awesome stuff to look forward to. When you see it, let us know what you think!

Down the Road a Ways

As we head towards the end of September, you will see us reach across to other chains to sell Platinum BRAWL-O-SEUMs as well as onboard new players from other protocols.

In our minds, there are three buckets we will be pulling players in from — from the lowest hanging fruit of our existing WAX Cloud Wallet owners, all the way to non-crypto F2P gamers.

Acquiring these free-to-play players is not easy, nor is it cheap. But, we believe that having a real game with real asset ownership will make this enough of a compelling argument to get these players to give our game a try.

Don’t worry, the BoS pushback won’t have a direct impact on the launch of the PvP game. The previously discussed end-of-September go-live date still feels feasible at this time.

However, there is a counter-intuitive notion at play here that increases the scope of the delivery. The greater potential a game has, the more you want to make absolutely sure every possible MVP feature, every piece of UI and every last bit of polish is packed in and delivered for the best day 1 impression of the full game.

This game will have a lot of attention focused upon its launch. It is crucial we get it right and continue to set the bar very high and never look back.

Before the End of Year

If we gaze a little deeper into our crystal ball, these are the things we are chasing and would like to have out before the end of the year:

Our goal is to lead the way in the space, and we think Blockchain Brawlers is the perfect platform to do so. We will never stop innovating, listening or delivering great gaming experiences driven by assets that are owned and controlled by the players.

We couldn’t be happier that you’re here and we look forward to gaming alongside you for quite a while. If you have questions, bring them to our attention in the first-ever Town Hall meeting on Discord this week, or in the various social media channels we are present.