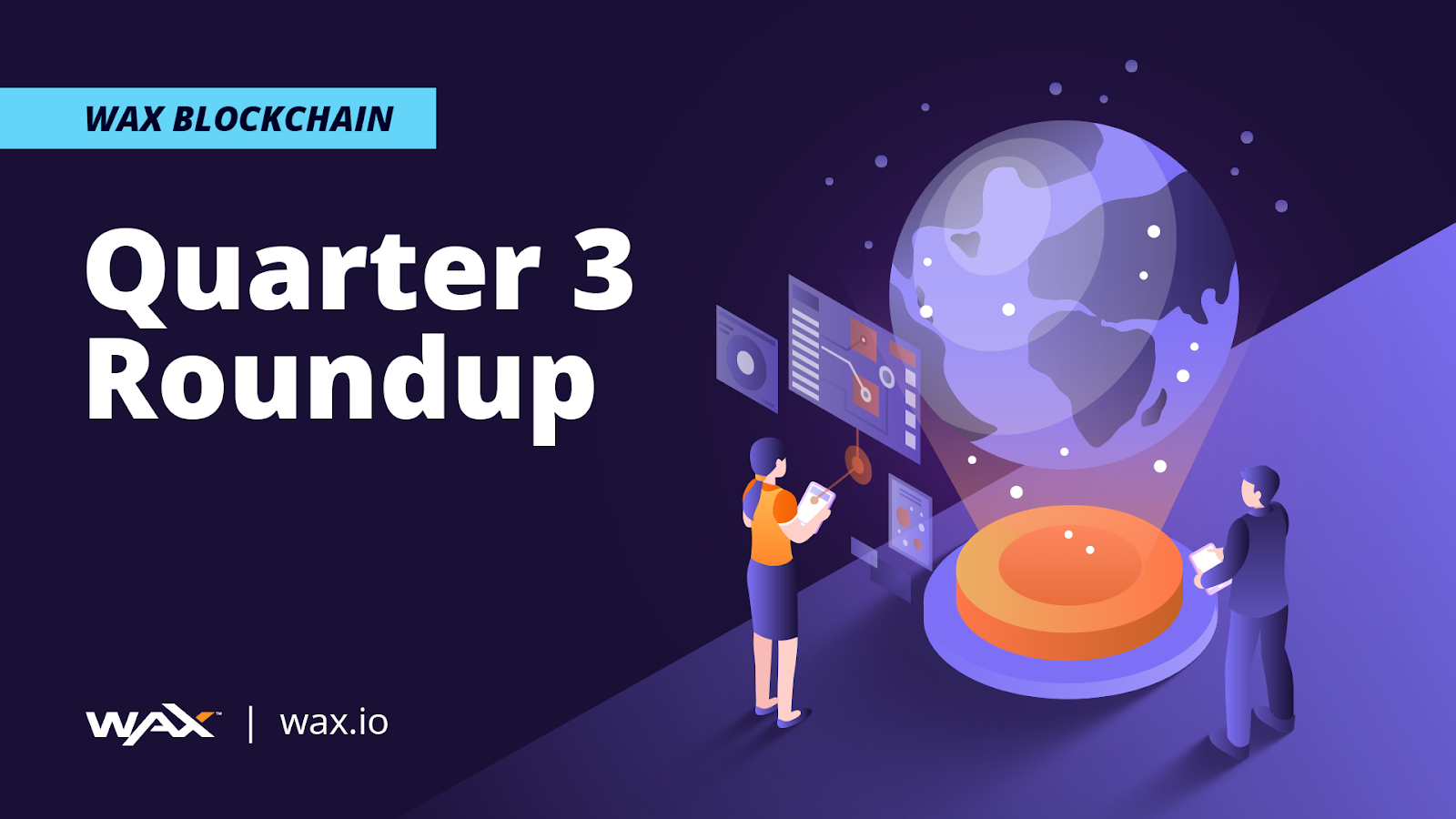 This year has been a wild ride for WAX, and quarter three was no exception.

Let’s take a moment to review all of the amazing things we’ve seen happen over the past few months and get pumped up for what’s to come.

Quarter three kicked off with some big news as the Blockchain Brawlers Mining Phase came to a conclusion — between March and August 2022, the entire pool of one billion BRWL tokens was mined with over 8,800 players getting in on the action.

This thrust us towards the next exciting era for Brawlers — the PvP Phase designed by Richard Garfield, creator of the famed card game Magic: The Gathering.

And, this was just the beginning. Shortly thereafter, we announced the official Brawlers land NFT, aka the BRAWL-O-SEUM, that can be used for crafting all things PvP for the game.

Brawlers also got a face-lift with the hilarious and colorful El Luchador Swag Kits for some added spunk in the Ring.

But, that’s not all. The BRWL Mall and vIRL Market launched without a hitch and can be accessed within the game. No more opening new browser tabs — you can get everything you want with the click of a button.

We rolled into August with an in-depth look at how the PvP Phase works in Brawlers, giving you a good idea of what to expect in the Ring.

Then, we kicked off the very first Blockchain Brawlers Summer BLOCK Party, where we took it one step further by inviting a select group of Ambassadors to access more juicy details and share them with the community over the course of four weeks.

Each week, we hosted giveaways for Swag Kits, Legendary Brawlers and even some BRAWL-O-SEUM crafting NFTs. And, you got a closer look at the game development process and behind the scenes from our team.

To end the month, we increased utility for both BRWL and Gold, allowing you access to more customization options. Plus, we gave you a look at how you can expect to use your tokens down the line.

In September, Brawlers got an exciting look at how the BRAWL-O-SEUM looks and works through this in-depth guide. This crafting mini-game takes luck and strategy. Check it out!

Music Mogul has its time in the spotlight when announced in early July as Tyranno Studios’ next play-and-own Web3 gaming experience, where you can really feel what it’s like to build your own music empire.

July allowed us time to dive into the nitty-gritty details of what Music Mogul mechanics will look like, including the importance of Genres, Recording Rooms, Chart Topping and Touring.

We want Music Mogul to be a game to last for the long haul, and we spent August explaining to you exactly why we think that will happen. We’re talking about real gameplay right off the bat and some serious deflationary precautions. Here’s how we plan to do it.

We also got a closer look at more gameplay mechanics, including what NPC Staff and Equipment NFTs are and how they’re used. Spoiler alert: it’s all about boosting performance in Recording Rooms, baby!

Music Mogul also got a huge update for how we plan on conducted future Artist Pack sales. There are plenty of one (1) card NFT Packs on the way before the official release of the game, including Hip-Hop/R&B, Rock, EDM and Country Genres. And for only $3 USD? Such a deal!

Music Mogul started off September right by kicking off the Early Buyers Music Mogul Rewards Program. You have the chance to receive special Early Supporter Reward Packs throughout the month if you hold at least 25 Artist NFTs or have a strong presence on the leaderboards. The higher your score, the more Packs you could earn!

We also wanted to take some time to answer some of your most commonly asked questions, to which you’ll find the answers here.

Plus, we took a deeper look into why we chose a management/tycoon style of game. Let’s just say, it’s going to be fun!

In September, the formerly known WAX Studios got a facelift and rebranded to Tyranno Studios with the ultimate goal of Bringing ownership to a mass gaming audience. Get the details here.

The month also introduced the vIRL Market, where we launched a set of redeemable limited edition vIRL Genesis Collection NFTs. Get a Hoodie, T-Shirt or Enamel Mug before they’re gone and show your vIRL pride!

To tie off the quarter, we also released an account creation flow update that makes it possible for you to create a new Cloud Wallet with a credit card through MoonPay, further increasing accessibility and convenience for users far and wide.

It’s been one heck of a quarter — we can’t wait to see what the rest of the year brings and we’re stoked to have you along for the ride!