In Case You Missed It: Brawlerverse Month in Review 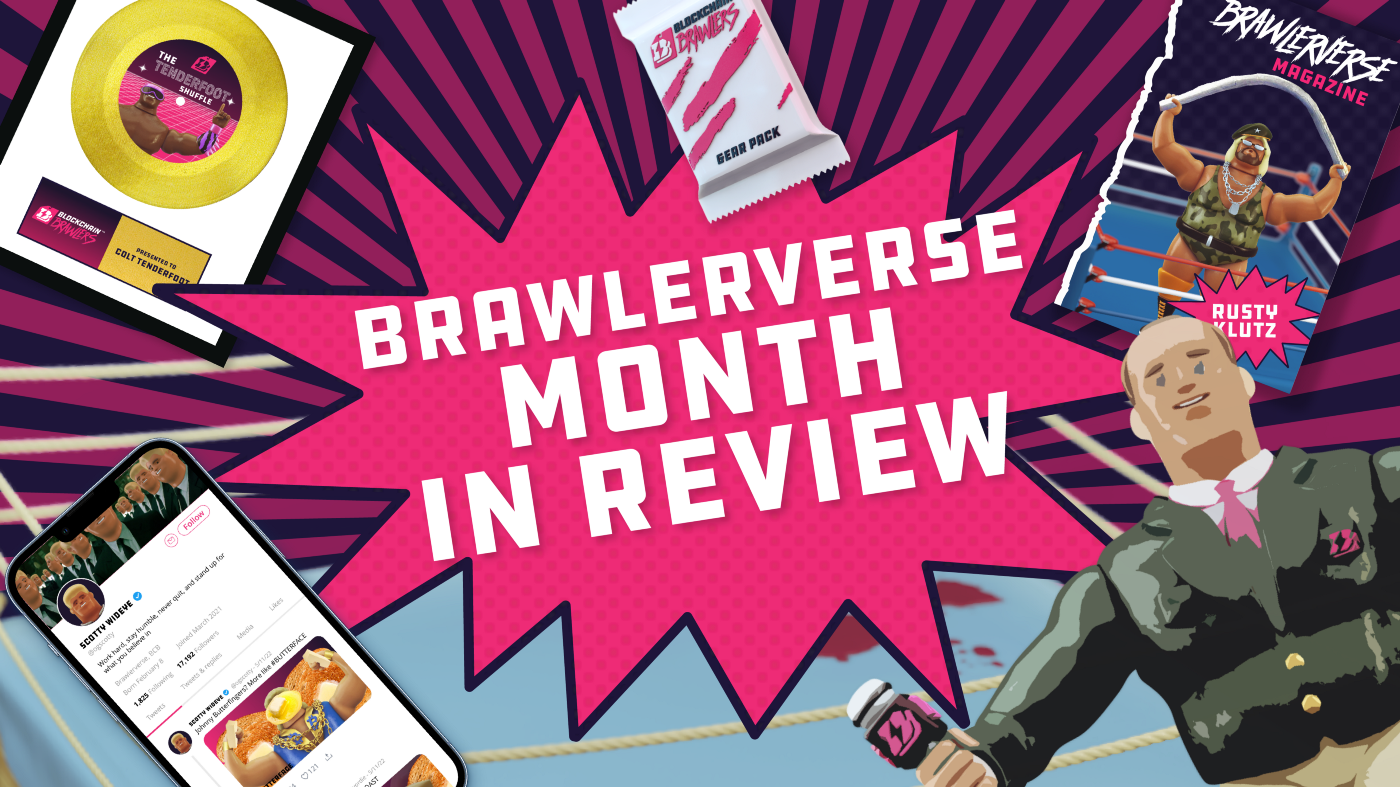 Welcome to the first edition of Month in Review, featuring recaps and highlights of all the action that went down in the Brawlerverse channel on Discord in May.

This is a breakdown of the rowdiest takeaways of the month for those who may have missed out. Whether you missed a storyline or just skipped out on the Brawlerverse channel as a whole, we’ve got you covered.

Check out the cream of the crop!

“My gridiron days are done… but my BRAWLIN’s just begun!”

Colt Tenderfoot: An All Around All Star

The Tenderfoot Shuffle took football fans by storm, a memorable “foot” note that Colt remembers as his first taste of the limelight off the field.

For one weekend only, players were able to upgrade their Scotty Wideyes by burning them to turn them into Barry Greenhorn NFTs.

“They call Scotty the everyman, but I’m here to be YOUR MAN this weekend”

Scotty Made the HOT TAG to Barry!

Scotty started the action and Barry’s bringin’ the muscle to keep it going!

Brawlers Get a Brand-New Avatar System

“These new avatar pics are the perfect way to show everyone who’s got the best mustache in the Brawlerverse.”

Johnny Butterfinger Has a Message for His Haters

“A message to my haters: If you weren’t born rich and beautiful, you’ll never know what it’s like to be a Butterfinger.”

Scotty Reminds Everyone Why He Brawls So Hard

“When I look into the audience, I see a bunch of people who could be me — so I’m fighting for all of them.”

“The Tenderfoot Shuffle” Tops the Charts

Surrounded by friends backstage, Colt shines up his beloved gold record, given to him for his hit “The Tenderfoot Shuffle” after hitting #1 on the charts.

ARCADE DANGER here for BODYSLAM BAY NEWS. Rumor has it new competitors are headed for the Brawlerverse. But who are they?

A native of Montpelier, Idaho, Mike Yellerbelly’s small town upbringing made him an eternal optimist. Believes real men should be afraid to cry — hopes to manifest his own destiny by facing his fears in the Ring.

“I’m at my best when being attacked. When in doubt, chair it out!”

Rusty Klutz is a viral video strongman from the Gold Coast of Australia. He’s a massive dude who’s trading in ripping phone books and bending steel bars on camera to breaking his opponents in the ring.

The Plot Thickens Between Yellerbelly and Klutz

ARCADE DANGER reports on what’s now known as THE GRAPE CONTROVERSY between Yellerbelly and Klutz. For Klutz and his manager George The Ginormous, Yellerbelly is the guilty culprit, and he is challenging him to a series of contents starting with a FASHION POSEDOWN.

The next Feat of Greatness between these two Brawlers was an all-out Thumb War. Apparently, a man’s manliness is measured by his strength of character, and the size of his thumbs.

It was supposed to be best out of three, but this thumb battle got a little out of hand.

That’s it for this edition of Month in Review. Be sure to follow the Brawlerverse channel over on Discord for daily live updates or check back next month to see what wild things go down between our beloved Brawlers!