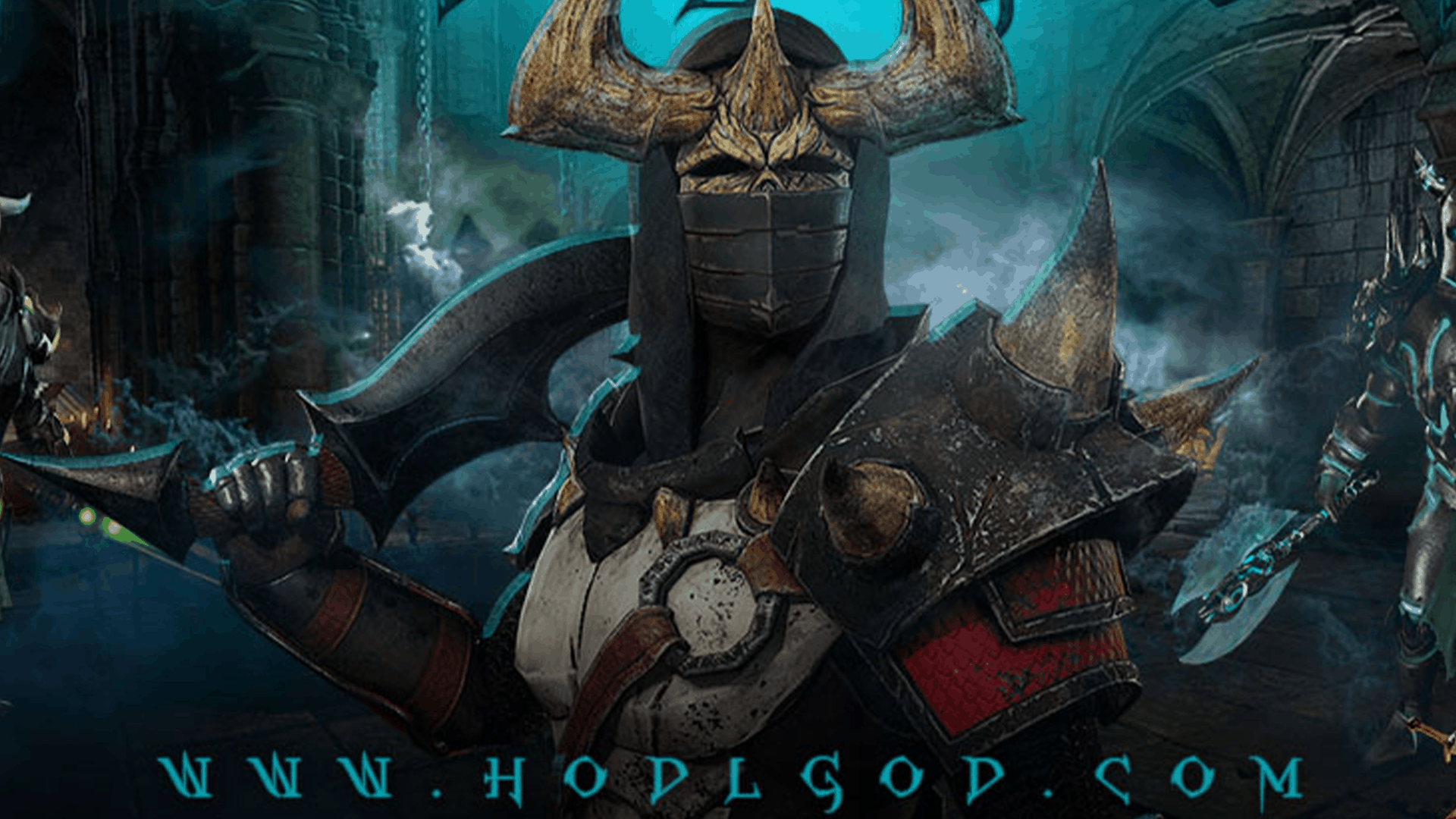 Rise to Power in the First Ever Blockchain-Based Battle Royale

*All features and game modes are subject to change.*

The time has come to journey to a new world, take up arms, and fight to the death to claim your title as a god.

HodlGod, the first-ever blockchain-based battle royale game, is coming to the WAX platform. As a pioneer in the industry, Dante Scott, CEO and CTO of Onessus Gaming LLC, and his team of experts are paving the way for the future of video games on the blockchain.

Collect, battle, earn and come out victorious if you dare.

Originally designed to be a turn-based browser game, HodlGod began production in September of 2019. Not satisfied by the end result, the Onessus team decided to completely scrap the game and rework it from the ground up in August 2020 — now the game we see and experience today, HodlGod currently resides in pre-alpha and will hopefully be complete and ready for launch in the first quarter of 2022.

HodlGod is a fast-paced, adrenaline-pumping, dynamic, third-person battle royale — the likes of which have never been seen before. Designed to be artistically similar to semi-realistic games such as Skyrim, this action-packed adventure also adds a bit of fantasy to the overall look and experience of the characters and their surroundings.

Entering the arena for the first time is sure to be an unforgettable experience. Between 8–15 players will be dropped into an immersive landscape surrounded by ancient buildings, unique hiding spots, and the chance to be the last person standing.

There are two basic fighting styles: pick off your foes one-by-one as the hidden sharpshooter with a bow, or face your enemies head-on with dual-wield weapons. Each weapon is essentially the same in functionality, however, the visual side of the skins may vary. Players will have the option to choose from a variety of melee weapons, such as a scythe, sword, or axe. Mix and match your play style to fabricate a lethal blow and ultimately outlast the competition.

Players will also have an array of different abilities that can be utilized. There are currently a total of 10 abilities, ranging from healing yourself and replenishing energy to dashing across the landscape and flying for a short amount of time. They all serve a specific purpose and allow you to fully take advantage of your environment and resources. Reposition quickly, find a new angle or rush your opponent with devastating damage. These abilities will give you the edge you need to overcome your enemies while incorporating healthy, fierce competition with a high skill-cap.

Hone your skills, create your own powerful combos and fight to the death!

The Promising Future of HodlGod: New content to conquer

As the game developers at Onessus gain feedback from fans, they continue to expand the HodlGod universe. Players can anticipate new modes and content peeking around the corner with time. Get the inside scoop below.

*Remember: All features and game modes are subject to change.*

Purgatory weaves PvE and PvP together in a dynamic and intense experience for players to continue improving their skills. A team of 2 players will fight their way through 4 stages of PvE content and face off against villainous AI creatures that must be taken out.

After the first stage is completed successfully, the duo will be tossed into a 2v2 PvP arena against another team that has also successfully completed the first stage. Whoever triumphs moves on to the next stage to rinse and repeat the cycle — all the way through 4 stages. Players can also upgrade the character’s abilities along the way to improve gameplay and come out victorious.

*Note: Players will always be matched against teams equal to the stage they are on.*

If the duo is to lose an arena in between PvE stages, all earned rewards will be lost. However, if at any point the duo does not feel confident in their abilities to win the next arena, they can opt-out at any point and collect their rewards.

So where does “Purgatory” come in?

The duo that loses the match will enter into a secondary arena against another team that also lost their previous match. Here, players get a chance at redemption — win the battle, gain a second chance and escape purgatory to continue your journey.

Another feature players can look forward to is a mass-scale arena to battle. Future schemes suggest between 30–70 players will be dropped into the chaotic field, allowing for an even wilder experience.

Play to Earn: NFTs and VOID up for grabs!

HodlGod offers multiple ways for members to earn real rewards by being a part of the game and its community.

While roaming the chaotic arenas of the HodlGod universe, players will have the opportunity to find and retrieve NFTs that have been hidden throughout the battlefield.

Dante explains, “You’re finding these NFTs and crypto drops as you’re playing, and they pop up above your head, so all the other players can see [that you have] it.”

He continues, “They’re trying to hunt you down and steal your crypto. So, your goal is to hold onto it for dear life and be the last player standing. Be the God… be the HODL God and come out on top.”

Whoever is the last man standing has the pleasure of claiming the item, which will then be sent to their connected WAX Cloud Wallet inventory.

As a way for community members to further increase their earnings, Onessus has ensured that each of their NFTs will provide additional avenues for generating cash flow.

“All NFTs in the ecosystem are a part of an upcoming system called NFTfi… every single NFT release ever will be stakeable, and you will be able to earn a yield on your NFTs,” says Dante.

The more VOID tokens staked into your NFTs, the more you can level up the collectibles — this increases their overall staking capacity and the value of the NFT itself.

Alongside earning rewards on your staked NFTs, Dante adds, “You always have the option to burn your NFTs for VOID. We want to add that layer of liquidity. It seems like it’s missing in NFTs today. If you own 1,000 or more NFTs, it’ll take you forever to sell them. But we want to add a burn mechanism as a part of NFTfi to instantly liquidate — to have that option for anybody that wants it.”

Finally, the topic of lending arises. If players choose to stake their NFTs, a ‘duplicate’ version will remain in their WAX Cloud Wallet, so they can continue to reap the benefits of using the skin in-game. However, if users receive a duplicate or are wishing to make use of other skins, the holder will have the ability to lend the skin via the secondary market. This will allow other players the chance to ‘rent’ a skin and try it out for themselves for a set amount of time, while the original holder generates more revenue.

VOID will, in the future, be obtainable through other avenues, such as gaining experience in a leveling mechanism. Users will eventually be able to level their accounts by gaining experience through playing and winning games. As accounts continue climbing the ranks, users will also earn VOID as a reward for their continued efforts.

Additionally, users will also be able to earn VOID by using the free Stream to Earn system. This allows players of all skills to reap the benefits of making money through the game. The beauty of Stream to Earn technology is that, as long as you remain streaming, you will continue to mine VOID — however, the more VOID currently held in your wallet, the greater the amount that will be rewarded to you — similar to that of a multiplier function.

The blockchain side of HodlGod offers a brand-new experience to video game enthusiasts. NFT packs have been released on WAX that allow customers a chance at crafting unique in-game items that both improve the experience and generate more rewards.

In previous Genesis Starter Packs and Immortal Genesis NFT Packs sold on WAX, customers have had the chance to receive “immortal shards.” Players can combine 4 shards of a matching set:

Once each of these shards have been obtained and combined, a bounty is generated. Bounties produce in-game objectives that players can attempt during their adventures. If the bounty is successfully completed, users are rewarded with the corresponding cosmetic armor set in-game.

Other than creating visual striking effects during gameplay, players rocking their newly created NFT cosmetic sets receive additional in-game perks, one of which being that if the player picks up an NFT during the round, it is automatically transferred to their connected WCW — even if they lose!

These completed armor sets also offer players a chance at potentially receiving even more loot in the future. The game developers at Onessus wish to incorporate a whole new level of NFT drops — those that can only be found and claimed by players wearing the skins.

The Onessus team deemed it imperative to find the right blockchain to fit their needs in order to service their fans to the best of their ability. Upon further comparison, a clear champion stood among the crowd.

Dante explains, “I used the WAX Cloud Wallet and saw how easy it was to use, so I started minting NFTs and saw all the different tools that were [available] — Specifically, the airdrop tool and the gift tool — so I can send NFTs through email and text message. All of these features [create] the user experience we need. This is beyond gaming today… with WAX, I can trade my NFTs from anywhere! From my phone or from my laptop… I don’t have to be in-game… this is something the gaming ecosystem needs.”

HodlGod creates an immersive, blood-pumping, unique battle royale experience that fans are sure to love. Gear up, collect NFTs, make real money and become the one true HodlGod!

Do you have what it takes?