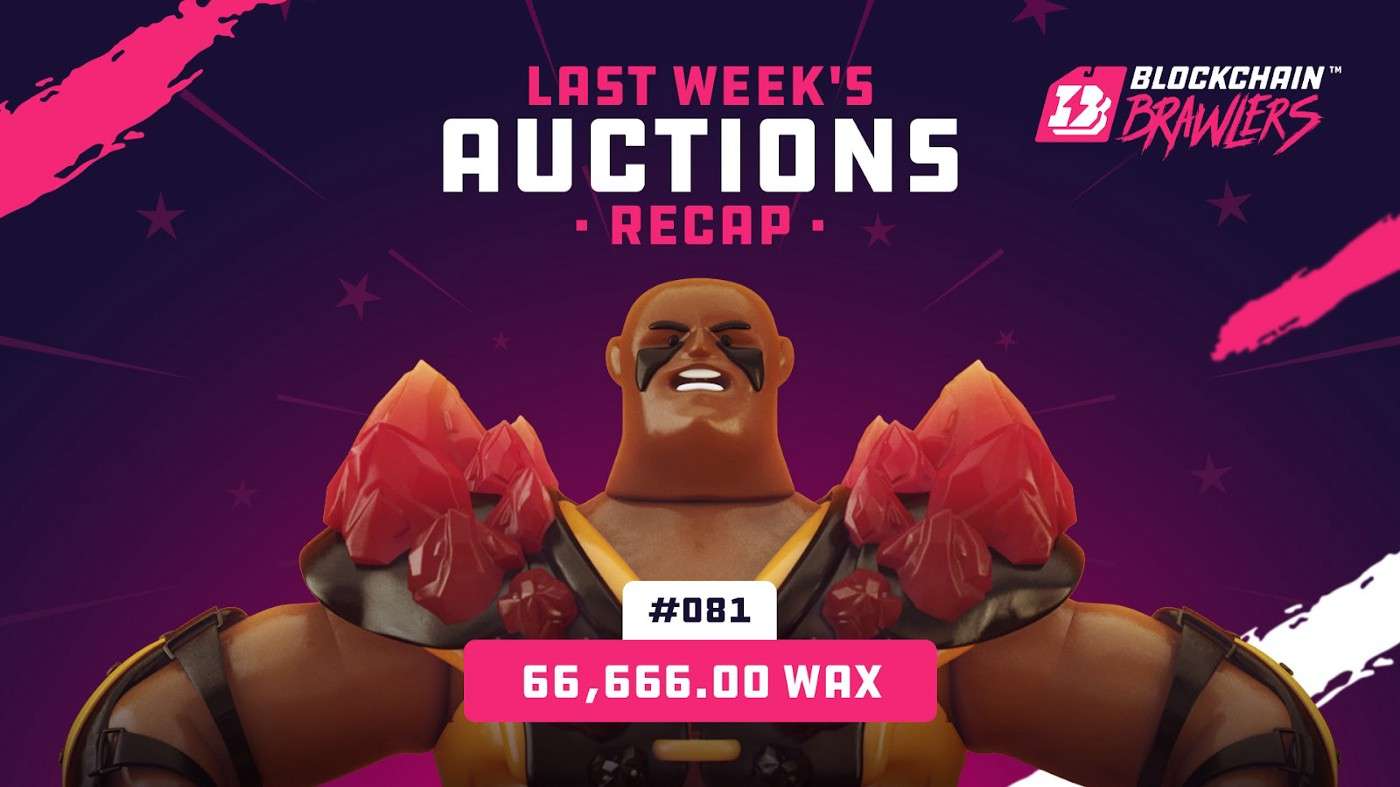 Looking back at last week’s auctions, the Blockchain Brawlers are still not kidding around.

There are no signs of the “Founder’s Edition” Legendary 1-of-1’s letting up, even after doubling down with 10 new Brawlers entering the Ring.

Nothing attracts a crowd of bidders quite like the opportunity to score a one-of-a-kind wrassler!

This week’s top Brawler erupted on the blockchain by showcasing the raw power of nature. Eliciting fear and wonder at the same time, The Volcaniac raked in a wild sum of 66,666 WAXP, with all four rarities amassing to 159,836.54 WAXP.

But don’t be fooled — the other Brawlers up for grabs made their presence known. El Loro, War Chest, The Boston Crab, Sunny ‘Fingers’ Romano, Overlord, Dusty Finnish, Blast Risengrind, Stormin’ Norman and Rick Lionheart brought in a grossing total of 777,736.71 WAXP.

This week, we introduce 10 new “Founder’s Edition” Legendary 1-of-1 Blockchain Brawlers into the mix. Start bidding now for a chance to get into the Ring with style.

From Phoenix, AZ, Tug-O-War has memorized how to tie over 72 unique knots. Plays “Red Rover” with gusto. Signature move is the Ropeburn Rigmarole.

Born and raised in Lenexa, Kansas, Harlequin doesn’t understand what healthy relationships look like and doesn’t really care. Ready to sweep you off your feet… literally.

Born and raised in Queens, NY, New Yorkupine’s prickly back is something of a weapon. Has a hard time finding clothes that fit. Women find his approach cutting.

Born and raised in Daytona Beach, FL, Sharktank enjoys gentle ASMR of waves on the beach and biting ankles in knee-deep water. Constantly has sand coming out of unmentionable places.

From Bardstown, Kentucky, Fannypackman Jones is stuck in the 80s. Enthusiastic about thrift shops and communicates via bad dad jokes. Definitely cooler than you.

From the mysterious land of Transylvania, Dark Matter is a bloodthirsty contender. He only leaves his gothic fortress when it’s time to hit the ring. Beware: his sonar is lethal.

Born in the Everglades, The Mosquito started losing his mind after his house was bug-bombed while he was inside. Convinced he can fly. Carries malaria.

A proud member of the Oglala Sioux Tribe. Wild Bear lives off the land with his pet squirrel Larry. If he starts rain dancing, be prepared for the shock of a lifetime.

A throwback from Prussia, he’s a guy you don’t want to mess with. The Prussian Nightmare is the epitome of a narcissist. Boils over into violence with very little provocation. Smells like motor oil.