Countdown to the End of the Blockchain Brawlers “Mining Phase”: What’s Next? 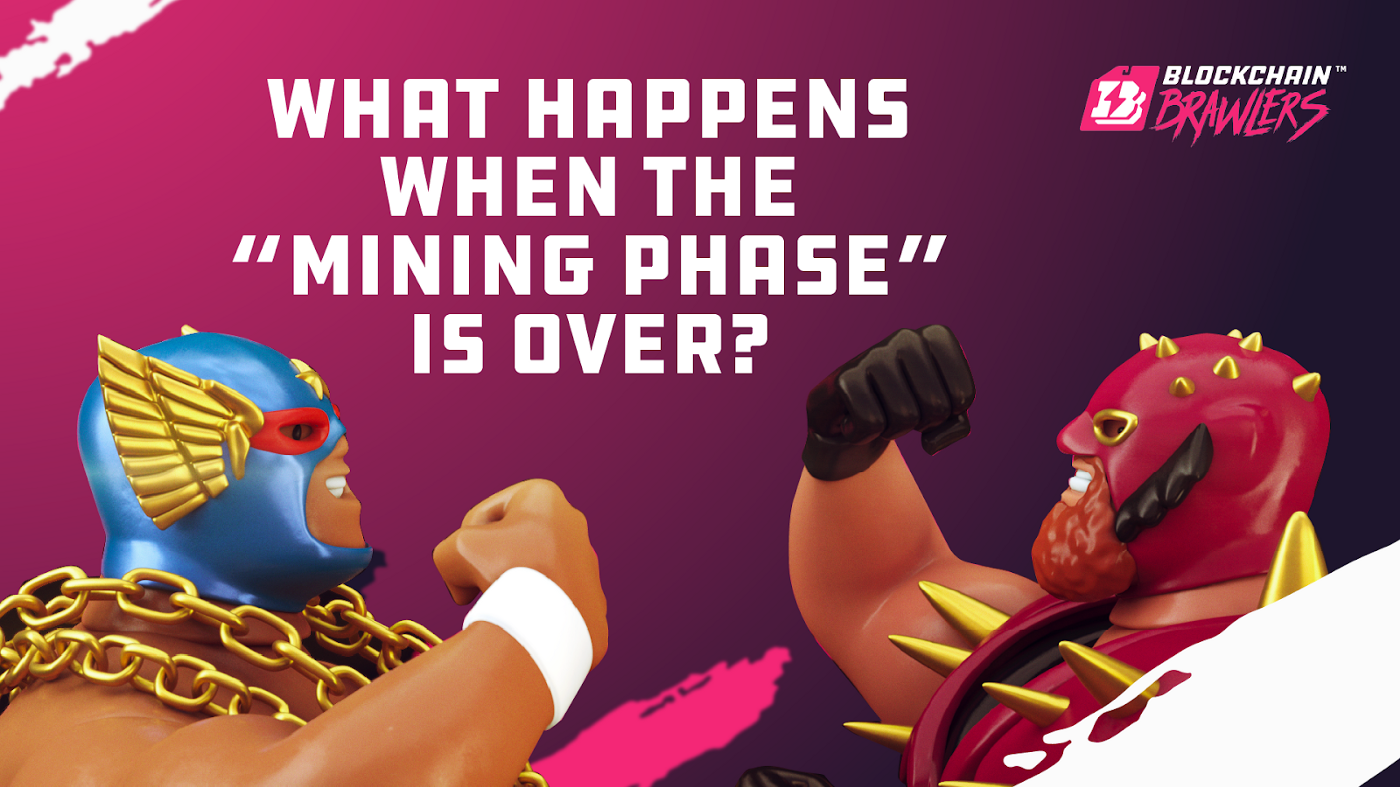 A new marketplace, increased BRWL and Gold utility and awesome player rewards are just a few things to keep your eye out for.

As of today, the BRWL Countdown sits at about 385,800,000, which means it won’t be long before the “Mining Phase” comes to an end. So, what happens next when there’s no more BRWL or Gold to be mined in the game?

That’s the number one question that most players have on their mind right now — and rightfully so.

From the beginning, we’ve been very intentional about every move we make with Blockchain Brawlers, and we’re adamant about addressing all of your most pressing questions.

There has always been a method to the madness when it comes to this living, breathing and growing game that’s ever-evolving. The first two FAQ releases provided you with an overview of what’s to come, but things are about to get a lot more exciting!

If there’s anything for you to know right now, it’s this: Those who stick around following the “Mining Phase,” will be greatly rewarded.

At the end of the “Mining Phase,” Ring and Gear assets will have zero utility. You’d be well-served to maximize the use of these in-game items right now. Due to the fact that you cannot sell them or remove them from the game as the assets have already been burned, they will hold no value moving forward. Ring and Gear assets are fungible and can only be utilized during the “Mining Phase,” though you can always hold onto them for sentimental value.

However, your Brawler NFTs will most definitely still have utility and your Swag Kits will still be usable in various competitions i.e. who has the most swagged out Brawler?

Will BRWL and Gold Still Have Utility?

Absolutely! BRWL utility is going to go up 10x and Gold utility will still be very important. The point is: HODL because both BRWL and Gold will have exponentially increased utility beyond the “Mining Phase.” You’ll want to have as much as possible when the “PvP Phase” launches.

Earning Potential in the Next Phase of the Game

We’ll be launching a crafting game that will be exclusive for those who purchase a BRAWL-O-SEUM Diamond NFT. And it will be a total blast for those who are able to get into the fray.

For the players that don’t get to participate, they’ll be able to buy the output of those players from the in-game store that will go live later this month.

There’s this whole notion that if you don’t buy the BRAWL-O-SEUM Diamond NFT, you will have to wait. But we’ll be having all kinds of things happening in the interim.

Be sure to check the Blockchain Brawlers calendar for updates.

The Series 1 Brawlers will no longer be craftable at all (ever) following the “Mining Phase.” We will be introducing Series 2 Brawlers, but there will be a minimum 30 day moratorium/freeze on any NFT crafting. As soon as the “Mining Phase” is over, crafting recipes will be removed.

Note: The Series 2 Brawlers will not be as powerful. The purpose they’ll serve will be to access the various PvP games, though in a diminished capacity.

We’ve always told players that you have to have a Brawler to participate in the “PvP Phase,” and that’s true. So, even though new players can come in and buy Series 2 Brawlers to compete, they won’t be as potent in the Ring as your Series 1 OG Brawlers.

For those of you who have been along for the ride since day one, you’ll be at a serious advantage when the “PvP Phase” begins.

You’re in the driver’s seat and there’s a lot of exciting things for you to keep your eye out for. Do you have to wait until October for additional gameplay following the “Mining Phase”? Who knows, there could be a super secret second PvP game dropping before the Richard Garfield designed PvP game. You’ll just have to wait and see.

As always, keep your questions rolling on Discord and Twitter.

And remember: Now is the time to continue stacking up that BRWL and Gold.