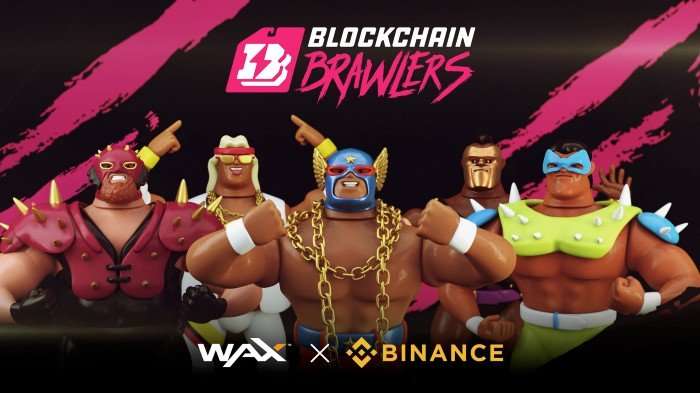 This is only the beginning. Blockchain Brawlers is soon to be a play-to-earn game on the WAX Blockchain.

From the top rope, it’s The Screaming Frog! He lands a devastating leg drop on Ivan “Beef” Stroganov. Looks like Stroganov won’t make it to dinner tonight! And The Welsh Dragon’s no match for The Red Giant, he’s got ‘em’ by the tail. No fire breathing, char-action is going to save the kid today.

Meet the Blockchain Brawlers, the most hilarious and entertaining series of NFTs in metaverse history. We’re talking about a ragtag brigade of high-flying heels that includes The Iron Pole, Crocodile Dundik and Thuggernaut (to name a few) that’ll help you wrestle your way to NFT supremacy.

Kickoff begins at 1 pm ET on November 30, 2021, when you’re invited to bid on and collect one or more “Founder’s Edition” Legendary 1-of-1 Blockchain Brawlers NFTs via auctions on Binance NFT.

The first 100 Brawlers in a mix of four (4) editions will go up on the auction block, giving you a rare chance to get into the fray from the start.

Each of them will be integrated into an upcoming P2E game, where you will take the role of manager and send your Brawlers out to wrestle for fortune and fame.

Up for grabs in the WAX x Binance NFT auction are four (4) editions of each Brawler:

The 100 “Founder’s Edition” Legendary 1-of-1 Blockchain Brawlers NFTs come in one (1) of four (4) editions, making each of them one-of-a-kind collectibles.

Following the Binance NFT auctions, 300 more Brawlers will be auctioned via WAX Digital Auctions, bringing the total number to 400.

Of the 400 NFTs, there will be 120 Champion Edition Brawlers sporting some pretty hefty belts:

Land one of these rare Champions for bragging rights both inside and outside the ring.

Not Your Typical PFP NFT

Get ready to show off your collection of ridiculously buff, overly-enthusiastic characters with the world.

Each “Founder’s Edition” Legendary 1-of-1 Blockchain Brawlers NFT comes with a PFP (profile picture) along with a full-body shot, so you can express your inner brawler across all of your social feeds.

Strike a pose, flex those arms and slap on some spandex — the world isn’t ready for this marvelous display.

In order to claim the PFP of your Brawler, you must move your NFT to WAX through an all-new NFT bridge.

A Bridge Between WAX and Binance NFT

Landing one or more “Founder’s Edition” Legendary 1-of-1 Blockchain Brawlers is just the beginning. If you’re lucky enough to join the party via the initial auctions or purchase on the secondary market, you’ll be a force to be reckoned with when the bell rings.

Soon after launch, a bridge between Binance NFT and the WAX Cloud Wallet, by way of Binance Smart Chain (BSC), will be forged. You’ll also be given an advantage in your quest for brawling riches and fame.

BSC is the very first chain to ever be connected with WAX for NFTs, and allows for Blockchain Brawlers to pioneer the way for gaming dApps that allow cross-chain trading for NFTs.

Also coming soon, in-game Blockchain Brawlers items sold via NFT packs that can be used during matches or traded with other players. Stay tuned!

Flying fists and torturous takedowns are just the beginning. This wild ride will roll out in four dynamic phases.

Beginning November 30, Binance NFT will hold the first of 100 auctions offering a chance for players and collectors to own “Founder’s Edition” Legendary 1-of-1 Blockchain Brawlers.

No Brawler will be re-issued at a later date, so don’t miss out!

Blockchain Brawler Packs will become available for purchase, containing additional in-game NFTs in a variety of rarities including common, rare and epic varieties via pack sales.

A bridge between Binance NFT and WAX will be forged so players and collectors can transfer their Blockchain Brawlers to their WAX Cloud Wallets. Following shortly thereafter, the bridge will also provide access to buying and trading any NFTs on WAX and Binance NFT, regardless of where the collectible was originally minted.

Blockchain Brawlers is being introduced at a time when P2E gaming is picking up speed. It’s time to wave goodbye to the days of worthless in-game cosmetics and welcome a new era of competition that means something.

And who better to do that with than your favorite mass of rowdy muscles?

As the Blockchain Brawlers community grows fast and furiously — we invite you to join in the fun on Discord. Get the latest news, ask questions and connect with other collectors and players.

Purchasing NFTs on WAX and its associated marketplaces ensures a green future for the blockchain. Officially certified as carbon-neutral, WAX provides fans with the collectibles they desire while offering the chance for partners and artists to flourish and supply valuable treasures for years to come. Visit https://on.wax.io/CO2/ for more info.