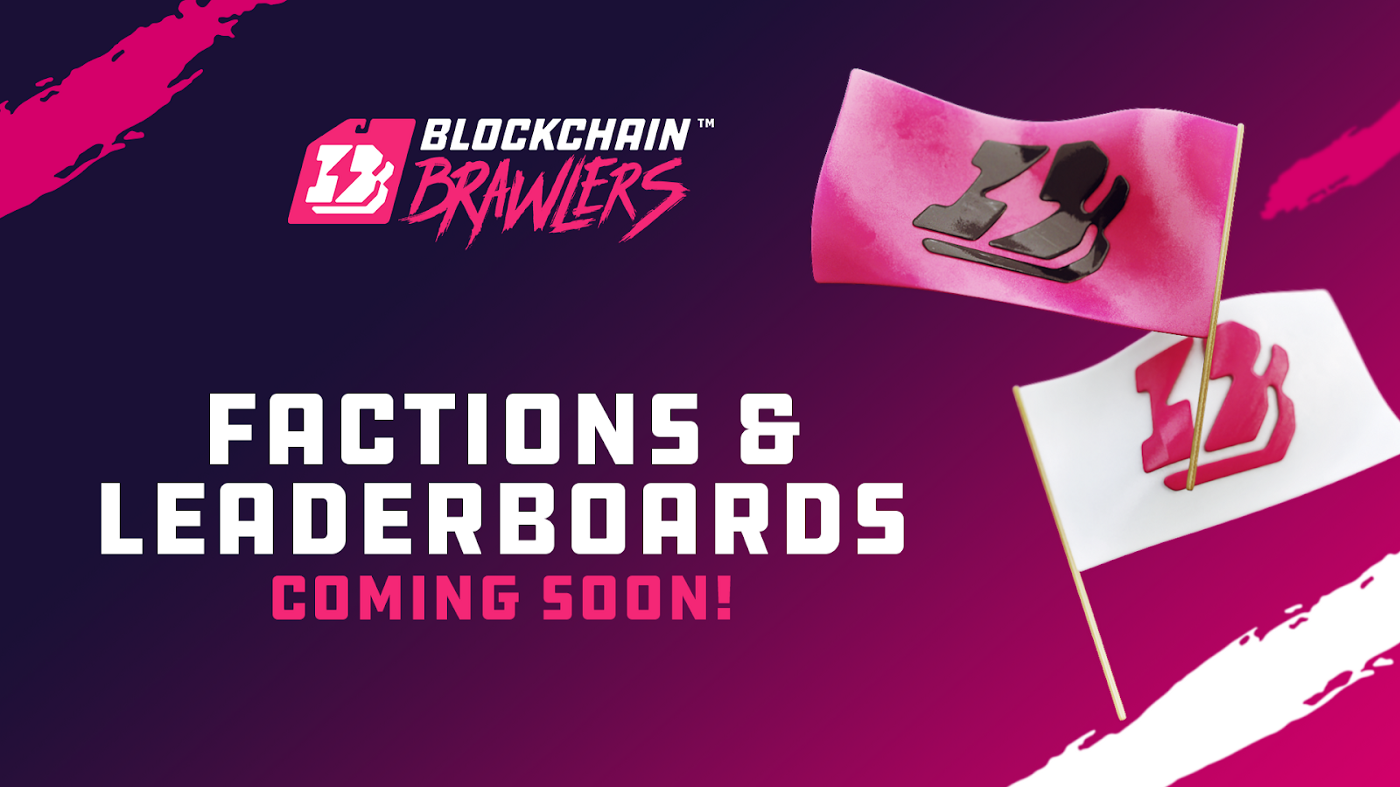 We’re excited to announce not just one, but TWO new Blockchain Brawlers features that will be coming in Summer ‘22 that will lead to new layers of socialization, competition and rewards.

Faction Competitions and Leaderboards are both major updates that have been serious goals for Blockchain Brawlers from Day 1 — offering players fun and exciting challenges in both synchronous and asynchronous competitions.

TEAM UP WITH ALL NEW FACTIONS

Blockchain Brawlers’ “Factions’’ are better known in wrasslin’ parlance as “stables.” Remember Degeneration-X, The Four Horsemen and the N.W.O.? Well, now is your chance to assemble your own crew and prove that your Faction is THE force to be reckoned with in the Brawlerverse.

Factions are groups of players who strategize and Brawl together, taking on other Factions as a group vs. other “stables” to see whose team reigns supreme.

Join your Faction and jump into the fray together to play, level up and Brawl your way to the top of the Leaderboards. There will be overall “Faction Achievements” as well as monthly Faction Competitions.

If you’re new to our Discord channel, or have been part of the community for a while, you’ll notice that Factions have started forming informally… and it’s already becoming obvious it’s time for players to begin teaming up and collaborating with purpose.

The extraordinary thing about the Blockchain Brawlers Faction systems is that they will be intricately woven into the game to add a layer of complexity and force players to think about the moves they’re making.

Actions performed during gameplay are in fact meaningful and have a lasting impact on the overall goals of individual Factions. All of them have the same intention: Constantly try to one-up each other to find out who will rise above the competition and emerge victorious.

Whether you want to explore different play styles, try out high-octane strategies, or put your Brawlers in a position to earn rewards and climb the leaderboards, joining or forming a Faction will be one way to compete for total domination during the critical “Mining Phase.”

“Power Score” Leaderboards will showcase player roster strength, and provide clear goals and milestones to reach if you want to be the biggest and baddest Brawler in the world.

Your “Power Score” will be calculated by adding up the total value of your NFTs, which we’ll assign a number to. There will be a numeric value assigned to Brawlers ONLY, not Gear or Rings.

Once official details are released on competitions and Leaderboards , you’ll be invited to compete for exclusive rewards.

Examples of rewards include (but are not limited to):

The Power of the Long Game

Why are you HODLING? Because there are opportunities to be had by joining or forming a Faction or going for high scores in tournaments, competitions, and Leaderboards. Playing the long game offers huge advantages.

The more regularly you play Blockchain Brawlers and the higher you land on the leaderboards, the greater the reward, especially with the “PvP Phase” rapidly approaching.

As we say in the Brawlerverse, “There’s power in numbers!”

Stay tuned in Q2 for more details on upcoming tournaments, prizes and more.

If you’re looking to conquer the Brawlerverse alongside the best of ’em, this is your chance. Factions and Power Score Leaderboards are coming, so get ready.

Will you reign supreme?