The Blockchain Brawlers “PvP Phase”: Best of Discord and Twitter 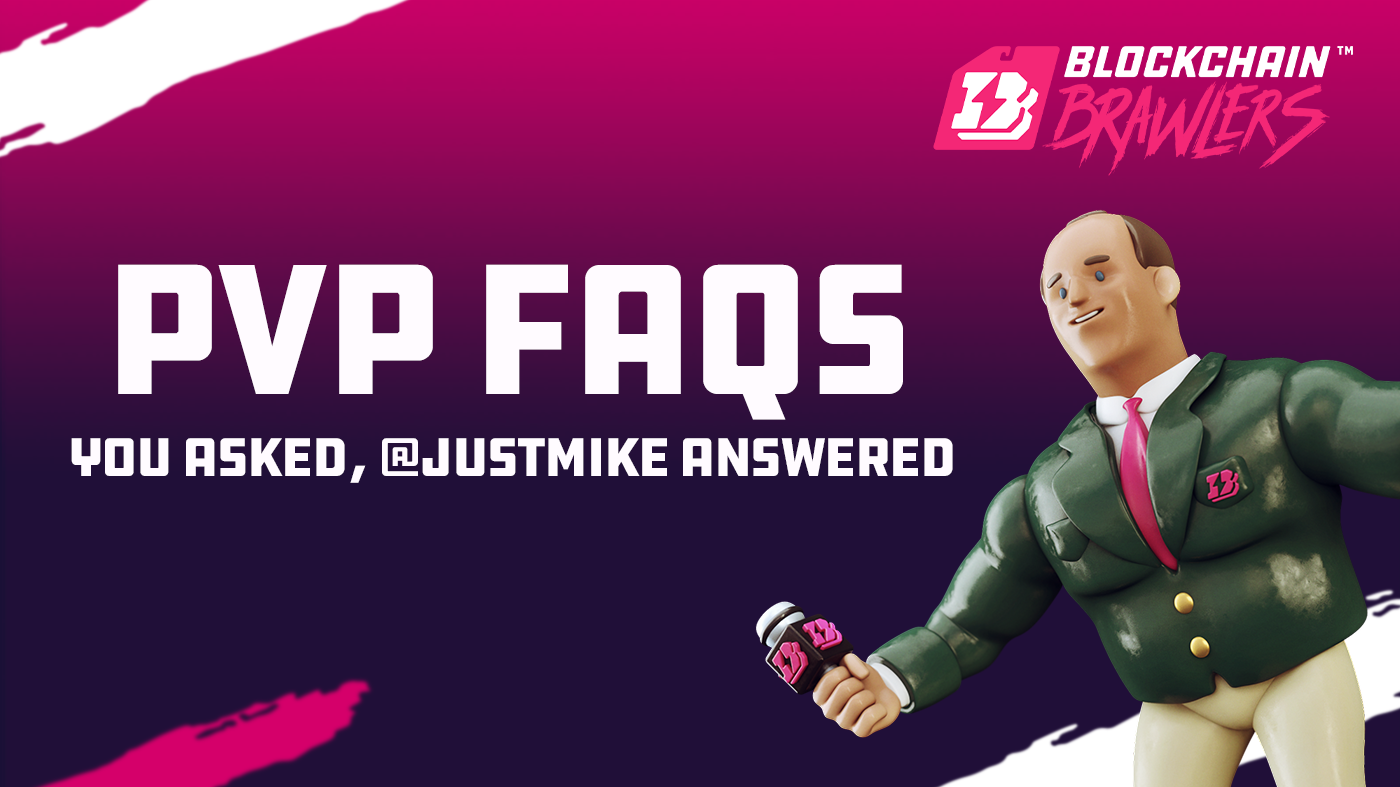 Gaming is an industry built on anticipation and excitement, so it’s only fair that after announcing how we plan to take Blockchain Brawlers to the next level our community of players would ask important questions and be hungry for answers.

Your questions are extremely important to the WAX team, and we’re eager to ensure our players are as happy as they can be, and as excited about the upcoming gameplay changes as we are.

We love that the Blockchain Brawlers community is very engaged and vocal — from bug spotting to feature requests and general gameplay critique — and we listen to everything.

It’s crucial to us to be available and to explain ourselves (no radio silence here) when it comes to any and all updates and changes we make because it’s as much YOUR game as it is ours.

The following are your most asked Blockchain Brawlers “PvP Phase” questions you’ve dropped in the social channels, and JustMike has done his best to answer them.

What happens if players mine the max supply of BRWL earlier than originally anticipated?

In this case, players will simply have to be patient, knowing that the official launch of the “Player vs. Player (PvP) Phase” (designed by “Magic: The Gathering” creator Richard Garfield) will be epic and well worth the wait.

Game development is a complex web of interactions that relies on many diversified pipelines of business and content. If even one area is affected, the whole game is affected.

We’ve set out to make Blockchain Brawlers one of the greatest games in the metaverse — and that’s exactly what we intend to do. A game can arrive quickly or it can arrive intact and powerful — you can’t have it both ways.

How will the “PvP Phase” of the game differ from the current version?

WAX Studios is throwing its weight behind Blockchain Brawlers to make a great game even better, and we can’t wait until you see what’s coming together. You’ll have more choice during gameplay and more opportunities to reap rewards.

We’re currently in the “Mining Phase”, which is a player vs. environment experience — whereas the “PvP Phase” will involve head-to-head competition, two people fighting at once and in the future the potential for tag teaming as two players battle two other players.

You’re literally going to be invited to make your own gameplay choices.

You’ll be dealt a hand and get to decide how to play it and your opponent — and Blockchain Brawlers will boast all the usual trimmings of the best multiplayer blockchain games. Stay tuned, as there will be many more details to follow!

Why will the “PvP Phase” make for better and more exciting gameplay experiences?

You’re actually playing a game and not simply mining a currency — and that’s just objectively awesome.

How will BRWL and Gold NFTs be used when the player vs. player game drops?

This is an important and very common question within our community.

While we can’t share each and every use right now, we can say that BRWL will be leveraged to enter massive global competitions, so that players can play and wager on head-to-head matches.

It will also be used in the crafting process (crafting is NOT going away) — in fact, we’ll be adding exciting crafting recipes into the mix.

Important to note: BRWL will have exponentially more utility in the PvP Phase than it does today. So, you would be wise to accumulate as much BRWL as possible. BRWL is the cornerstone of game economics, and will be much more enjoyable for those HODLing BRWL.

Sold all your BRWL? Hit the market and get some more, knowing it’s going to pay off.

Remember, following the “Mining Phase,” you’ll no longer be able to mine for BRWL — it will only be tradable on the market. Of course, you can craft and swag your Brawlers out, but you can’t mine.

When it comes to Gold, we anticipate it being a requirement for competing in future tournaments and head-to-head play. Could there be a Gold wager room? More on this possibility later!

In what ways will the “Founder’s Edition” Legendary 1-of-1 Brawler NFTs be impacted? Is it going to be a pay-to-win economy?

It’s important to know that your NFTs will matter, but that doesn’t mean if you’re playing with a Scotty or Barry, you’re out of luck. A part of the secret sauce to your success does include holding and using higher rarity Brawlers — and placing multiple Brawlers in the game, but there’s more.

If you own one or more “Founder’s Edition” Legendary 1-of-1 Brawlers, you will gain some pretty huge benefits in the Brawlerverse, but strategy will also play a big role. Those playing with Common Brawlers will be given opportunities to outsmart those playing with rarer Brawlers — so, while a Legendary may have its advantages inside and outside the ring, Common Brawlers can do some pretty major damage and reap the rewards.

Will the card game be played with the current Brawlers?

The “PvP Phase” of the card game will be heads up, meaning it’ll be YOU vs. ME, not Colt Tenderfoot vs. Scotty or Ric Flair going up against Barry Greenhorn. Animations will be put into place, allowing you to pick which character plays out the Brawling animations.

So, yes, the current Brawlers will be a part of the game, but a player’s alias will take center stage.

Plus, it’ll be a wrestling card game with themes and skins on top of it.

How do new players get into the game once the “Mining Phase” is over and the “PvP Phase” begins?

Let’s be clear, the players that are playing the game right now will have a clear advantage on day one of the “PvP Phase” as opposed to those coming in later.

We will be incorporating a free-to-play mode for new players, but if they want to compete and earn rewards, they’ll have to purchase certain assets and add to the game economy before they can compete and battle with the likes of our current players.

The free-to-play version of the game will be an effort to appeal to more users who might want to take it for a test run first. We think having a free starter version of Blockchain Brawlers PvP is an important moment for the game, because people can try it out and see if it’s for them before purchasing NFTs, BRWL and Gold.

What is the “Mining Phase” and why is it so important?

The “Mining Phase” is critical because you are accumulating things that help you succeed in the “PvP Phase” — BRWL, Gold and Brawlers. Players, it’s time to HODL your scarce Blockchain Brawlers assets and resources.

How long will the “Mining Phase” last?

As soon as we hit a billion BRWL earned, the “Mining Phase” will end. How long it will last is really up to the players.

When the “Mining Phase” ends what happens to Rings and Gear? What purpose will they play in the game moving forward?

At this point, the utility of Rings and Gear is still being determined for “PvP Phase” gameplay. Stay tuned for more details.

Will players still be able to craft new Brawlers once the “Mining Phase” is complete?

Yes, crafting will continue and remain the same. It’s all about BRWL utility and Gold utility, so you better stack it up. As always, we reserve the right to change crafting recipes and cost.

Do players who lose during PvP receive any rewards or earnings?

No, you either win or lose. During gameplay, there will only be binary outcomes.

The Blockchain Brawlers You’ve Come to Love, Leveled Up

By all appearances so far, the “PvP Phase” of Blockchain Brawlers is shaping up to be exactly what it sounds like: In addition to having fun, it’ll be a game that holds up to its hype and will be positioned to deliver awesome gameplay experiences and rewards to our players.

Now is the time to continue stacking up that BRWL and Gold. Additional details on PvP will follow as we delve deeper into the new mechanics.