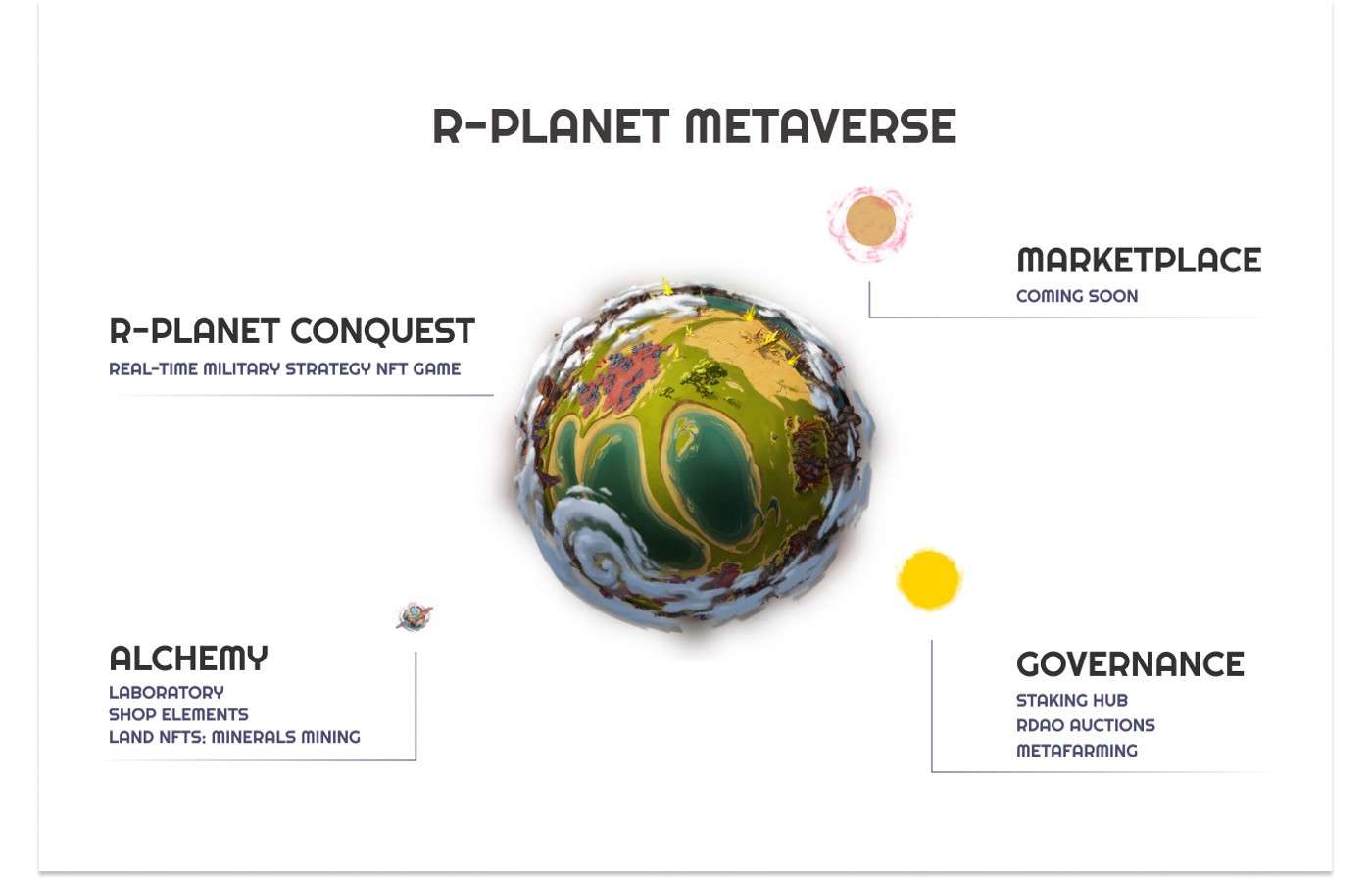 In a far-off galaxy resting among the stars sits R-Planet, a land full of priceless resources, scientific anomalies and unrest between factions.

The play-to-earn game is getting a massive overhaul, a fresh coat of paint and a huge helping of TLC with a set of exciting updates as it steps into a metaverse all its own.

Whether you’re already a fan, or have never heard of it before, you’ll want to check this out. The way we play R-Planet is getting ready to change — and dare we say, it’s for the better.

The base game of R-Planet is rather simple, and only previously consisted of a few things. Players start by acquiring something called Aether, a fully-tradable utility token that can be used in-game to purchase game resources. You can (still) do this one of two ways — purchasing on Alcor Exchange, or staking NFTs.

Buying on Alcor is the fastest way to buy whatever amount you desire, however, staking NFTs you already have in your wallet is free. R-Planet has a long list of supported, third-party collections that can be staked, including Upland, Blockchain Heroes, Alien Worlds and more.

Once you have some Aether in your arsenal, you can then buy basic Elements from the game. Then, you can try your luck at combining four of these Elements in an effort to create a new one.

The goal is to discover something that hasn’t been created before, and if you’re successful, there are bountiful rewards heading your way, including R-Planet NFTs to increase mining power, FTs representing your material and the chance at your portion of the Inventor Fund (a 0.002% chunk of the total R-Planet prize fund).

However, there is so much more to explore. Check out these juicy upgrades!

Say buh-bye to the days of the simplistic R-Planet browser game and hello to an immersive blockchain-based Massively Multiplayer Online (MMO) game for desktop gamers and mobile users alike.

Starting with the Alpha version on April 25, you can join the conquest in an all-new Real-Time Military Strategy (RTS) experience, where you’ll have to decide which of the three factions you’ll join, build a base, raise an army and charge into battle with allies at your side to claim victory.

One of the best parts? It’s free to play, so anyone can enjoy the action without having to spend a dime.

Don’t worry, though — R-Planet definitely still falls under the play-to-earn category. All the basics of crafting Elements still exist and are ready to be utilized. In fact, Aether will be used to buy an even greater variety of goodies than before, such as Robots, Land and other tools for your adventure.

Speaking of Land, there have already been two Land sales, and another is on the way, so keep your eyes peeled for a chance to get in on the action.

On top of these already pretty awesome updates, there are several other things coming your way, including new token Governance.

If you’re familiar with the original R-Planet, you’ll know that there’s been an issue with a surplus of Aether for a while now. In order to increase sustainability for the long haul, the devs have put some new changes in place, starting with RDAO distribution through auctions.

Basically, RDAO will be auctioned off by players bidding with Aether, and will ultimately be used to have a vote in new governance rules down the line.

More RDAO equals having more of a say in these rules — don’t wait to get yours.

With the Aether pool shrinking comes a change to the staking mechanism as well.

In order to help maintain and regulate the rate at which Aether is being mined, the devs have narrowed down the stakeable third-party NFT pool to 21 collections at any given time — the bright side is, these collections are chosen by you.

Through voting with Aether, you will have a voice to tip the scales. Plus, the more Aether you vote with, the greater the mining potential of the NFTs.

If you’ve got a project that you’d like to see in the running to be stakeable on R-Planet, fill out the form here.

Holding R-Planet tokens also opens up the opportunity for Metafarming.

Essentially, you will earn a new LP token for adding liquidity to staking pairs (AETHER/WAX and RDAO/WAX) on DEFIBOX. The LP tokens can then be staked for additional return on RDAO or you could choose to earn real WAX DeFi rewards instead.

Because of the liquidity, you can transfer your LP tokens back to Aether or RDAO when the time is right.

Honestly, we’ve hardly even scratched the surface on all the nitty-gritty details that are going into effect, and things are starting to heat up. Get all the details here and check out the official roadmap — it’s time to buckle in for an exciting ride!