Million on Mars: A Play-and-Own City-Building MMO Experience
Unlike Anything Else 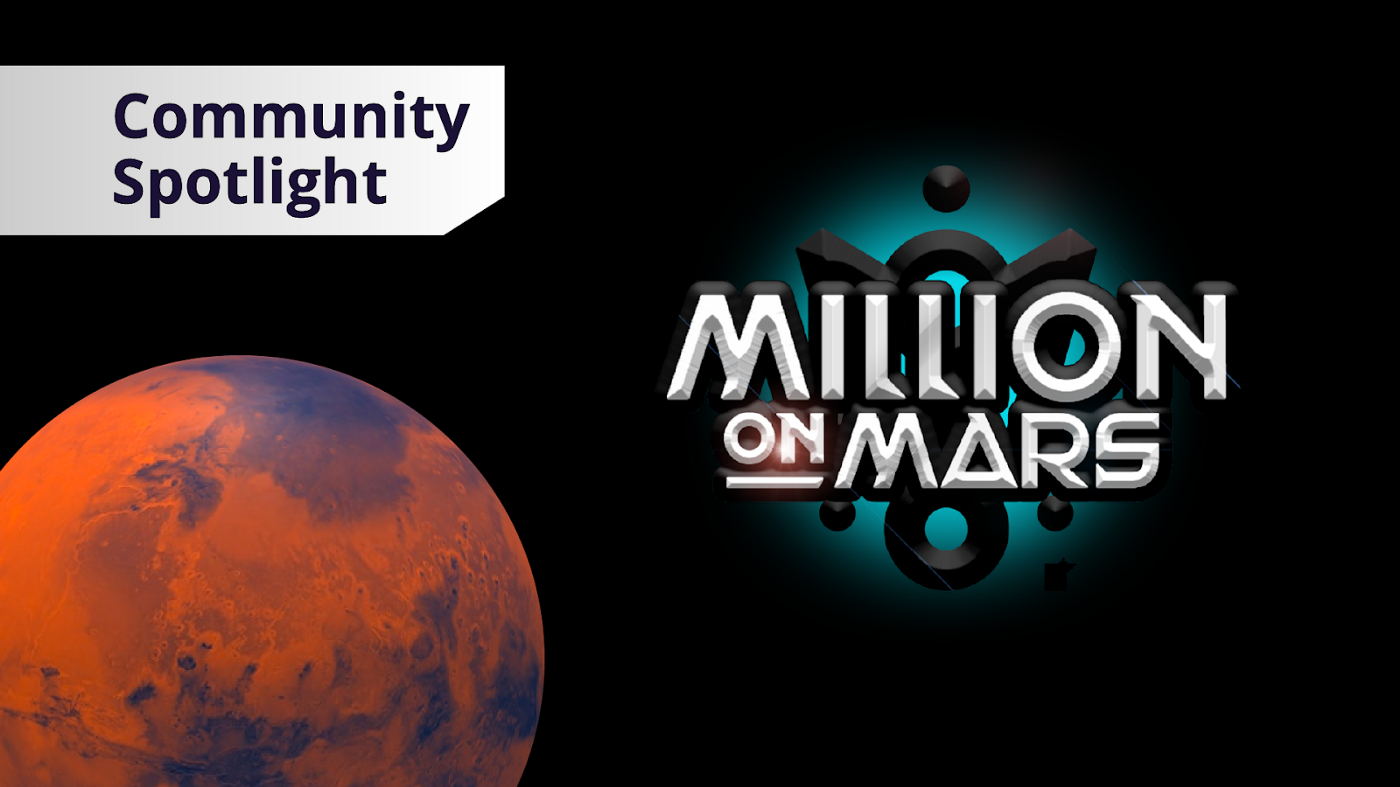 Learn about the game preparing future generations for life on the red planet — one 40 acre plot of real Martian terrain at a time.

It may not appear that immersive entertainment video games and the interplanetary science being led by NASA have much in common, but the two actually go hand in hand.

In fact, video games that simulate alien environments are essential to how humans will explore the depths of space in the future.

One such game is Million on Mars, a play-and-own city-building MMO experience unlike any other.

Typically, games in general have a conventional structure, tasking players with survival to earn points. Million on Mars allows players to acquire their very own plot of real Martian terrain (each plot is 40 acres) and is a stunningly realistic interactive engine grounded in science.

We were excited to connect with Chief Creative Officer Erik Bethke to talk about the player-driven and owned economy, the game’s official virtual currency and realistic resources, the exciting upcoming Martizens NFT drop and why the team’s value-based approach to gaming is paying off.

Craft and Strategize As You Settle on Mars

On the Red Planet, you can build your own rovers, construct buildings using blueprint NFTs, scavenge, plant crops, filter water and even build your very own Dusk empire (Dusk is the official in-game virtual currency) or buy what you need from another player!

Delivering the most realistic MMO Mars city-building experience, Million on Mars offers a rich, player-driven and owned economy where you unite to problem-solve with other players and team up toward the common goal of a thriving settlement of one million people.

The name of the game comes from a throwaway sentence from Elon Musk after someone asked him the question, “How many people need to be on Mars for the planet to be self-sufficient?” He replied with, “I don’t know, maybe about a million people.” So the name of the game is to answer that question.

“Can we, the game developers plus the players together, build something where the players are crafting and creating a player-driven economy?” asks Bethke. “That’s exactly what we’re doing. Does it take a million players to be economically self-sufficient on Mars? Or is it 100,000? Or 4 million? We are going to find out and bound the problem!”

Million on Mars is built on the WAX blockchain, and you must have a WAX Cloud Wallet (WCW) to play. However, everything you craft on the Red Planet can be leveraged across multiple blockchains.

This game has two tokens, Dusk and Glitter. The first token, which is on the WAX blockchain, is a utility token that sees a high in-game consumption.

“Dusk has a high-frequency use for everything,” he explains. “It’s used for crafting, loot drops, work order and market fees, and to buy in-game items in the shop. It’s our currency, which we’ve designed to stay as stable as possible. I believe that’s really important for a healthy economy, whether in the real world or in a virtual world. You need to have money to lubricate the trade.”

As for Glitter, the token will be launched very soon. This DAO governance token is fixed and is a store of value. It was designed to rise in price over time and allows players to express themselves and say that they have a certain fraction of authority in-game.

When launched, this low frequency, high value token will be imbued into a crafting cycle to breathe life into it. You can almost think of Glitter as a tiny fractional business license or a sovereignty license across the realm.

An Equitable Community of Settlements and Habitats

Currently, players can invest in land deeds by claiming 40 acre plots on Mars, for which they get the exact latitude and longitude. You’ll also receive the digital terrain height map of that exact location using real data from the NASA HiRISE project. If you bought it, you own it outright. Then, you can begin installing greenhouses, solar panels, smelters, mining rigs and rovers onto your land to build and create your Settlement.

“Another option for scoring land is playing the game. In about 30 days, just from playing, you can earn your own piece of land,” adds Bethke. “Sure, we have land that is worth thousands of dollars but we also offer free land. This is what sets us apart from a lot of other crypto games that treat land like digital servitude.”

Featuring a very diverse spectrum of landowners, the game is open to everyone, making it an equitable community.

Settlers of the Red Planet in Mars have a rich growth path — Habitats are the most complex crafting chain, and players must work really hard to create them. Habitats allow the players to rent out their buildings to other players, and upon acquiring three Habitats, players will be able to establish a named Settlement on Mars. This allows them to play as a guild and a whole roadmap of features for complex social play styles.

“I feel like we have one of the true organic use cases for blockchain gaming and ownership,” explains Bethke. “Who doesn’t want to own 50 acres on Mars? If you could point to it on a global map and tell your friends over Sunday brunch that you own a plot of land on Olympus Mons (the largest volcano in the solar system), that would be a pretty stellar conversation starter, don’t you think?”

10,000 NFT Martizens Are Heading to Million on Mars

The other cool thing about Million on Mars is it offers weekly drops at NeftyBlocks and deploy new features/content daily.

“We’ve launched a sale every week for six months,” says Bethke. “I don’t believe there’s any other project on WAX that has recurring revenue every week. Our goal was always to make a game with unlimited opportunities and make living and creating on Mars in 2064 an awesome experience.”

Soon to drop will be The 10,000 unique NFT Martizens that will be jam-packed with in-game utility and much, much more. So far, 4,000 of these have sold out in the pre-sale exclusive to players of Million on Mars. These 18 characters, each with their own visual traits and a rarity system, will play a huge factor as the Metaverse takes shape.

What makes this collection even more exciting is that it’s tied to CEO and Founder Keri Waters’ novel Buffalo Commons, which lays out the world design of in-game stories and characters that are being woven into the games narrative.

“From a collectible point of view, we believe Martizens is a world-class profile project,” explains Bethke. “In-game utility will be a whole other ballgame. One utility is that they can be inserted into our new Habitat buildings and help automate certain aspects of managing large Settlements, like refilling power and water. They will be kind of like a lieutenant automation helper.”

The other end game utility is that Martizens will provide a buff to the profession system that has been rolling out. There are 10 different professions in the game, allowing players to level and skill up.

As they craft, both players and Martizens can gain experience points — making it very much an MMO RPG Mars crafting settlement business SIM. Recently, players have been able to get into role-playing by specializing in the 10 professions.

In-game pre-orders are open now and available while supplies last. Minting will begin June 13, 2022 — the location will be announced soon.

You can buy your pre-order here.

What’s on the Horizon for Million on Mars?

Next on the roadmap, the Rover-based PvP mode. It’s not going to be dystopian style combat this time — there will be some very heavy competition to look forward to. The PvP mode will feature robots battling it out in arenas to resolve disputes on resource access, including one-on-ones and three vs. three.

“There’s going to be some revolutionary stuff coming at you very soon,” says Bethke. “We’re likely to innovate some native iOS and Android apps that don’t have crypto functions directly connected, but may stay connected to your Settlement. Our virtual economy is very robust. We have about two-thirds or three-quarters of our player to player trade happening inside the game (not on the chain).”

Essentially, this will give players the power to craft, build solar panels, and create mining rigs to sell to other players or keep the items for themselves — it’s all going to fuel the Million on Mars play-and-own economy.

Million on Mars and Sunflower Land (a rapidly expanding play-to-own crypto farming game on Polygon) are partnering up to send players on the ultimate cross-chain, crossover quest. This is one of the first times in web3 history that two thrilling games will join together to bridge universes and create genuine interoperability between them!

The Crossover event began 9am CT on May 24, 2022, and will run until 9am CT on June 23, 2022. Following the event, interoperability will remain in place for both games.

There are no humans (at least not yet) on Mars, but this incredibly detailed and immersive city-building MMO game is bringing the average person closer than ever to experiencing life on the Red Planet.

Are you ready to explore a new world that could potentially be our future home?

Join Million on Mars by visiting the website, playing the game or checking out their Twitter or Discord.