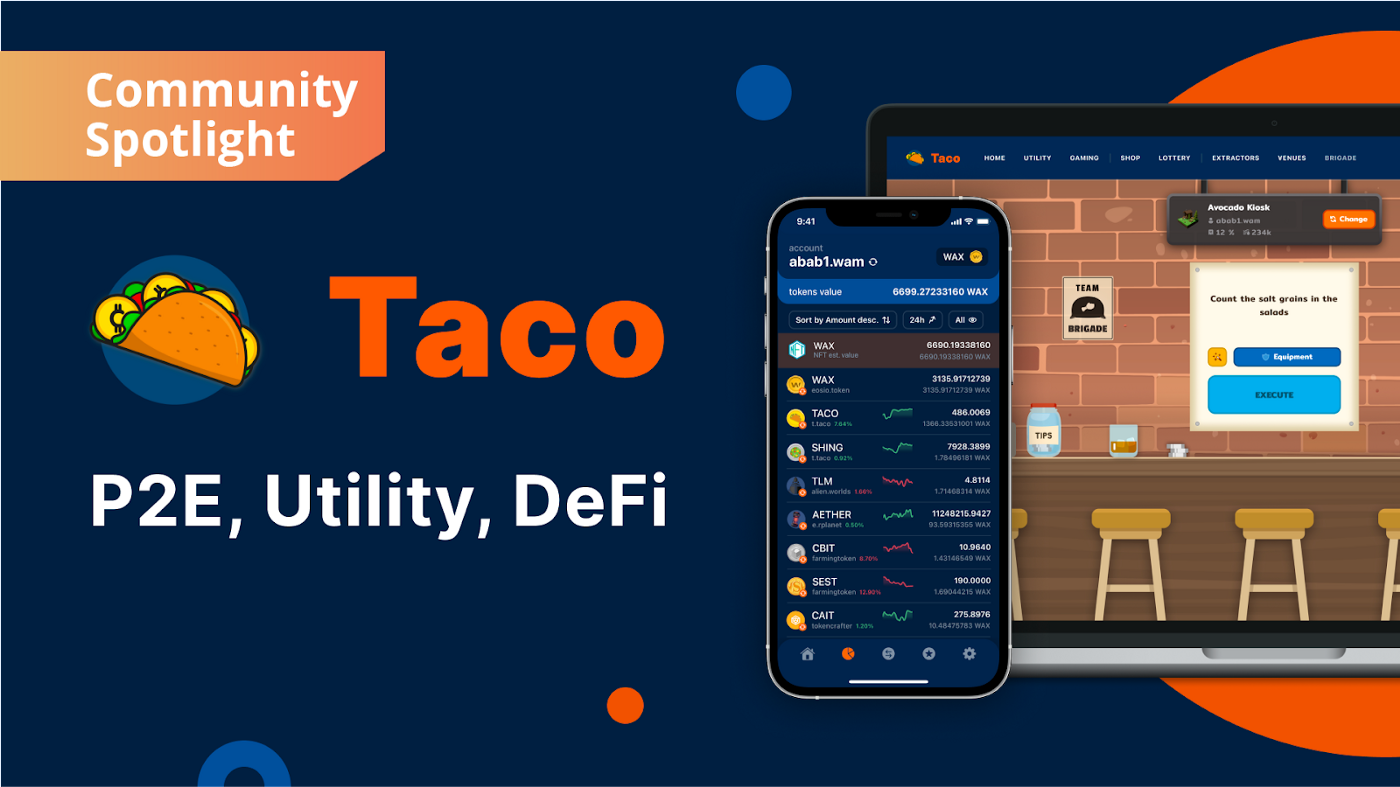 This WAX Blockchain utility tool allows users to make transactions, swap tokens, manage their NFTs and interact with the most popular dApps.

Play-to-earn gaming is more than simply a twist on traditional gaming. It’s a way for players to earn cryptocurrencies, digital assets and NFTs by doing something they love.

With mass adoption underway, it’s necessary to have at least one app that manages your crypto wallet and stashes all the goods being earned, purchased, traded and gifted when playing your favorite blockchain games.

That’s where Taco comes into the picture.

Taco is a multi-purpose, community-oriented project that is powered by the WAX Blockchain. This mobile app allows you to track your tokens, integrate with other dApps, manage your accounts and organize NFTs — all from your pocket.

The main objective? To reward the Taco community for its daily WAX Blockchain interactions.

In a recent conversation with WAX, Federico Gentile, CEO and Founder of Taco, and Niccolo Costanzo, Communications and Marketing, spoke about the origins of the app, their team’s unwavering approach to innovation, how the app integrates both gaming and utility, and what’s on the horizon as the Taco Universe unfolds.

Harnessing the Power of the WAX Blockchain

“We were WAX users and players to begin with,” explains Costanzo. “Our goal was to create a wrapper of all WAX projects. That’s why our name is Taco. The first product we launched was the Taco Utility App, which is a smart wallet app that has various features users can unlock when they pay with the TACO token. These tools were designed to interact with other dApps on WAX. We always wanted to create a product that was entry level for any WAX user — and people love it.”

Taco is not a trading app or crypto wallet. Essentially, it uses third party APIs and services to deliver a useful suite of utility tools on the WAX Blockchain. It’s the first and only mobile app that lets users manage their WAX NFTs and token wallets directly from their smartphone for free — anytime, anywhere.

A couple weeks ago, WAX partnered with Taco to create the ultimate Blockchain Brawlers app tool, which allows Taco Sauce giveaway winners to Brawl, Heal their Brawlers and Withdraw and Deposit BRWL tokens directly from inside the Taco app.

When Taco Tools are unlocked within the app, users receive a respective Sauce NFT. Holders of these NFTs are able to then use the tool. Taco Tools can also be unlocked by purchasing the Sauce NFTs on the secondary market.

Astonished with the number of app downloads Taco garnered from the beginning, the team decided to develop other features including gaming and DeFi.

The main currency of the Taco project is the TACO token. It can be acquired in several ways — from the market, liquidity pools and NFTs. TACO tokens also have multiple use cases, such as unlocking Taco Tools within the app, access to the Taco Shop or purchasing NFTs.

For the Taco Universe, the main currency is the SHING Token. Users can get this token from playing the play-to-earn game Brigade, from the market, liquidity pools and NFTs. SHING is essential to play, unlock utilities and much more.

The project also has its own NFT collection, which offers benefits to holders such as weekly TACO airdrops, whitelisted drops and new unlocking features. All NFTs have at least two use cases. It’s very rare that they drop NFTs with only one use case.

The Tacoverse relies heavily on NFTs, which each have a purpose and play an important role in the ecosystem. Every Tuesday is Taco Tuesday, and to celebrate, they distribute TACO tokens to users who hold certain NFTs.

So, what in the world is the Taco Universe?

Taco’s gaming metaverse is great because it’s completely NFT-based and keeps on surprising and delighting its community. It has a dedicated app of its own, the Taco Universe App, which is a full fledged metaverse in the palm of your hand. You can download it here.

The team has launched the Taco Universe very slowly to ensure a great product before sharing the gaming platform (built on WAX) with its entire community.

Along with the platform, they launched the SHING Token that was designed for gaming purposes.

The Taco Universe will not just be a single specific game, but an entire collection of games (along with third party games) packed with various genres to attract every kind of player.

Ultimately, it will shift how blockchain gaming is viewed by the gaming community at large — offering a skill-based gaming experience alongside skin NFTs and token-based rewards and crafting systems.

By upgrading Venues using Ingredients, players can claim SHING, create liquidity pools and earn with Taco Ingredients. You can learn more about it all here.

“For us, this is incredible,” says Gentile. “We are developing this ecosystem around Extractor NFTs and Venue NFTs using SHING tokens and TACO tokens as in-game currency. By upgrading these Venues, users unlock games. Our community is unlocking games, so as you can imagine it takes time. There are zero shortcuts. Our growth is 100% organic and our community is super engaged and committed to this project. We need their feedback because they are essentially developing the Taco Universe alongside our team. Who knows — in the future Taco could even have a Blockchain Brawlers Venue!”

Taco held two major Taco Universe sales back in January of the Extractors/Miners and Venues/Lands which both sold out.

Here’s how the Taco Universe works:

Venues are the main interface, upgradable NFTs which unlock services. For example, at Level 30 players earn their DAO governance token (not transferable and only used for community decisions). Then, at Level 50 you can rename your Venue and at Level 100 you can unlock the first play-to-earn game called Brigade.

They reached Level 100 a few weeks ago, which unlocked the Brigade game for the community.

“With the game launch, we are very excited because a lot of users are playing it. It’s very fun and refers to a kitchen brigade. Venues are restaurants so we have the taco stand, the club, the kiosk… it’s been a huge success in terms of users and crafting,” adds Costanzo. “Our community is crafting plenty of NFTs. The game has attracted a lot of interest from both gamers and Twitch streamers who wanted to talk about it. It’s an entry level play-to-earn for any WAX user. You can play it completely for free. Obviously, you can invest small sums to improve your position in the game, but our intention was to make Brigade with no barriers.”

What’s Been the Key to the Game’s Success?

The Taco team never rushes. For them, it’s not a race, it’s a marathon. But there are other factors at play here. They believe it’s important to take their time and do things well or not at all.

By explaining the mechanics of the game piece-by-piece and educating their community via their Medium blog (which acts like a whitepaper), they’ve gained their community’s trust and support.

“Depending on how steady our community continues upgrading, we are hoping to have a full working ecosystem and launch our skill-based game in Fall 2022 when our community reaches Level 300,” says Costanzo. “The Taco Universe is going to be massive!”

The next big thing is the Taco Swap, which involves partnering with lots of projects to launch this new DeFi DEX ecosystem driven by community and projects. It will be the third swap inside the WAX Blockchain. One important thing about the swap is that it will be based on the TACO token itself.

There will be a lot of features to promote and improve the DeFi system for all projects to autonomously create their own DeFi systems. Also, it will be the only gamified DEX system linked to numerous games.

“We love our tokens because they don’t have just one purpose. They are not single use cases. TACO and SHING can be used for everything,” adds Gentile. “They have true utility. We’ve created a lot of entry points and long-term stability. Our goal is to grow steadily and organically. It’s always better to under-promise and over-deliver.”

Laying the Groundwork for Innovation and Disruption

On many levels, it appears Taco’s momentum will continue into 2022 and beyond. New developments are happening all the time, gaining traction with users and players, and extending the accessibility of blockchain-based gaming.

Gaming and NFTs are a proving ground for the future of blockchain and much excitement awaits! Taco’s one-of-a-kind, wildly versatile app will certainly help lead the way.

Starting today, Taco will be giving away a FREE WAX branded Taco NFT (with no minting limits). It’s an Equipment NFT that can be used while playing Brigade. Anyone can mint this NFT during the promo period to increase their rewards. It’s Taco’s way of celebrating our partnership.

“I get excited about our partnership with WAX,” says Gentile. “We love working with a skilled team like theirs. We know we can create something of value on the WAX Blockchain. I hope that our collaboration with Blockchain Brawlers can go even further in the future. Taco is here to stay!”

Want to learn more about Taco? Check out their Discord, Play Brigade now for free and earn SHING, follow them on Twitter, visit their website or read their full Whitepaper.