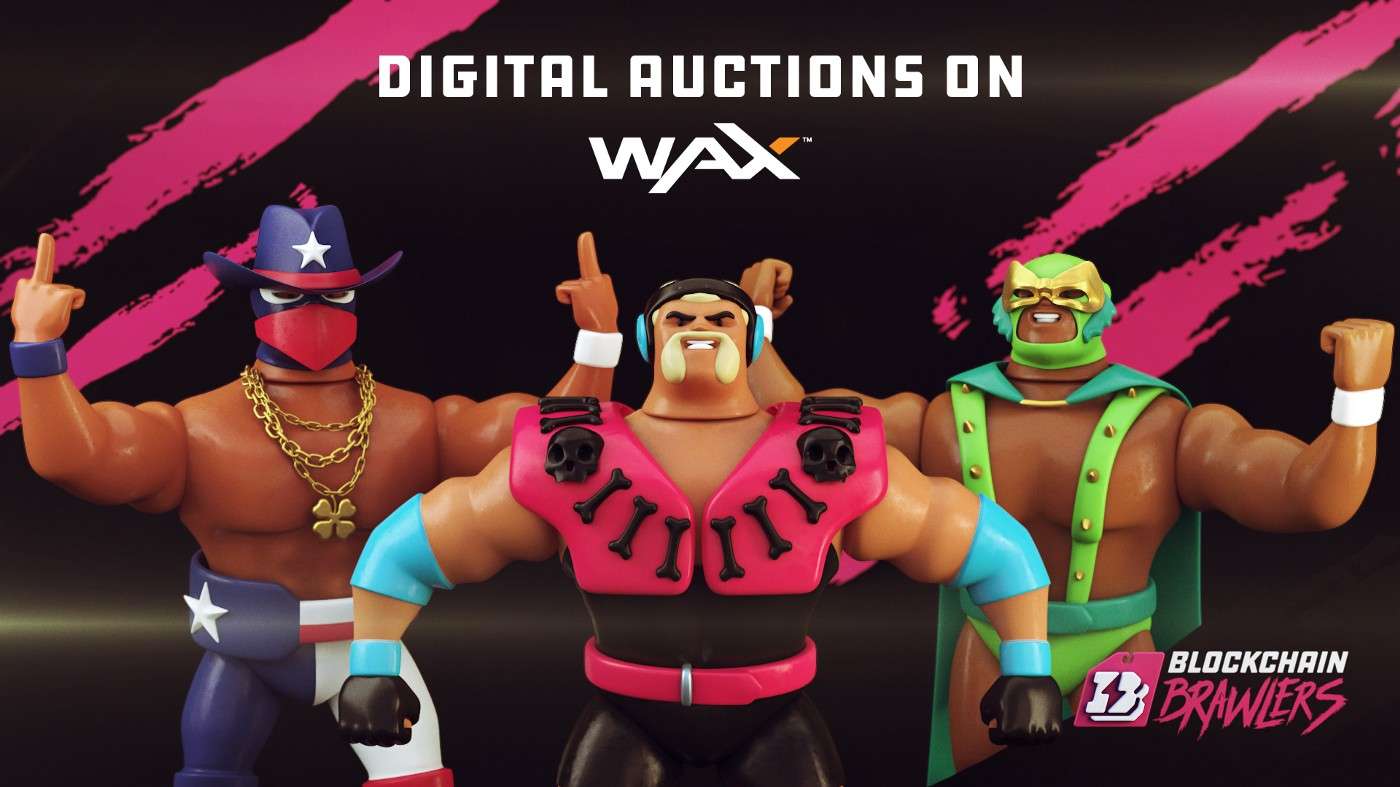 Get ready! Your chance to land a “Founder’s Edition” Legendary 1-of-1 Blockchain Brawler Begins on January 4.

If you missed out on the Blockchain Brawlers™ Binance NFT auction in November, now’s your chance to get in on the action. These guys are literally shaking up the metaverse!

The Blockchain Brawlers are bringing the perfect mix of fun and insanity to the world of NFTs while being billed as the most hilarious and entertaining series in metaverse history. These hooligans represent a refreshingly different way for fans to get their wrestling fix via a soon-to-launch play-to-earn (P2E) game created by WAX Studios on the WAX Blockchain.

The Brawlers themselves have varying backstories and aesthetics that make them all unique! And when we say unique, we’re not kidding around. With names like Black Hole Sun, Thrilla Gorilla and Undead Ned (to name a few), you can only imagine what kind of signature moves they’ll be unleashing in the ring. Soon enough, you can wrestle your way to total domination if you play your cards right.

It all started in November when the first 100 out of a total of 400 “Founder’s Edition” Legendary 1-of-1 Blockchain Brawlers went up on the Binance NFT auction block. Needless to say, the kickoff was a massive success.

The Brawlers have nabbed mainstream appeal, with fans rushing to place their bids. Unfortunately, U.S. residents couldn’t jump into the fray on the first batch, but that’s all about to change.

Beginning January 4th (ending February 7th), WAX Digital Auctions will launch a new batch of “Founder’s Edition” Legendary 1-of-1 Blockchain Brawlers, making them available in the U.S. and beyond.

Four (4) new Brawlers go on auction every 24 hours with each auction lasting 48 hours, Monday through Friday. Bids start at 1000 WAXP.

Plus, there are 120 Championship Edition Brawlers in the entire collection, including 100 National Champions, 18 World Champions and 2 Metaverse Champions.

Each “Founder’s Edition” Legendary 1-of-1 Brawler will play an integral role in the upcoming Blockchain Brawlers play-to-earn game (launching in early 2022) where they will knock heads for fame and fortune.

If you’re lucky enough to get your hands on a “Founder’s Edition” Brawler, you’ll also receive a free “Common Ring” game piece, which is required for gameplay.

The same applies if you purchased a “Founder’s Edition” Brawler on Binance NFT during the initial launch. To receive yours, all you have to do is transfer your Brawler via the WAX x Binance NFT Bridge (when the bridge is officially forged in the not too distant future) and a Common Ring will be dropped into your WAX Cloud Wallet. Don’t have your Wax Cloud Wallet set up? Create a free account in just two clicks.

Wrestling is all about the spectacle of excess — and the Blockchain Brawlers do not disappoint. There are no boring moments when these guys step into the ring.

Wonder what distinguishes one Brawler from the next? It’s a lot more than their costumes and technical proficiency.

Here’s a taste of the Brawlers you’re soon to meet:

Wears the hottest mullet in the UK. When he’s not knocking heads with his massive shoulder pads, he’s chillin’ in his tanning bed.

Meet your worst nightmare straight out of Hamamatsu, Japan. Stay away from this guy’s orbit. Black Hole Sun has supermassive powers from which nothing, not even light, can escape.

The pride of the Hillcrest District in San Diego, En Fuego is addicted to the color pink. Don’t touch his flaming eyebrows, they’ll burn ya to bits.

What to Expect Next…

Also coming soon are additional in-game Blockchain Brawler items that will be made available in packs of Common, Uncommon and Rare varieties via pack sales.

Starting February 8th, you can get your hands on a limited quantity sale of 1000 Ring Packs for $100 per pack. This is a must if you have ambitions to wrestle because you can’t battle without a ring.

February 9th, you’ll have the chance to stock up on Gear Packs during a limited quantity sale of 1000 packs for $100 a pack. Every Brawler can get a boost with some gnarly wrestling gear.

February 10th a limited quantity of 500 Brawler Packs go up for auction for $300 a pack. Within the packs, Brawlers will be available in Common, Uncommon and Rare.

Stay tuned for specifics on game mechanics, crafting and how you can earn more BRWL tokens per match.

Last, but not least, the official Blockchain Brawler game launch is set for late Q1.